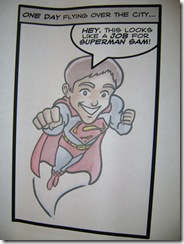 With the photos we sent the other day, I had Ted draw a cartoon of Sam himself in superhero getup.  I think it turned out great!  Of course, Ted had no idea why I wanted to take a picture of the picture, given that it was printed from the very computer where I now sit and type this.

But to me, there’s something REAL about a photograph that you don’t get from a JPG.

So here it is – real as all get out.  I packed the cartoon between two pieces of cardstock for safekeeping, then got scared that they’d think it was JUST blank cardstock, so I wrote “open me” or something stupid on both sides of the cardstock.  Wish I’d included a frame, but that would cost way too much to mail.

And THEN… well, I opened up First Language Lessons, our grammar book, and in a perfect confluence of the stars, our “lesson” for the day was to address an envelope!  How perfect is that?  However, Naomi refused to use the WI postal abbreviation for Wisconsin.  I think it was just so exotic and wonderful, sending off a package to a faraway land.  (the last time she had to write out her address, I had her do it on a small envelope and tucked in a secret message for her; then, we timed how long it took to get from the mailbox a block away to our house – 2 days!)

Anyway, here’s her envelope – I think she did a great job! 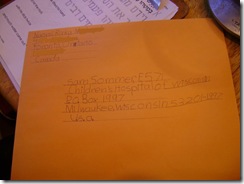 (We actually only have about 13 FLL lessons left and then we are “graduating” to Book 2!!!)

Anyway, Sam’s ima-on-the-bima says he doesn’t really need more packages right now (now she tells me!).  But if you want to help their hospital, the Children’s Hospital of Wisconsin, here is a great list of ideas.  There’s also a wish list at the Ronald McDonald House where they’re being hosted.  She has a few other suggestions for how you can help as well…