Don’t forget to read my Parsha Poem and parsha overview, plus this cool sprouting branch craft project.  Plus… copywork and parsha activities – something for every week of the year!

Art credit:  I am so excited to present actual original artwork, specially commissioned from a talented illustrator on fiverr… I can’t believe I have to pay for art when I live with several talented illustrators.  Nevertheless, I am thrilled with this image!!! 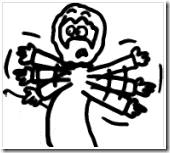 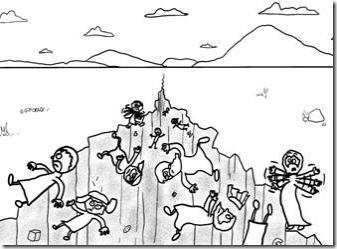 Korach was a wicked man to argue with Hashem,
So it was his destiny that that was who’d condemn;
He could run to the north and flee to the south,
But he’d never escape the earth’s gaping __________!

We see that Moshe was most humble of men
So when Korach challenged him, what happened then?
Most of us would have just sneered at his thunder,
But Moshe perhaps took a moment to wonder.  Where can we see this?

Hashem will never waste a word,
Yet sometimes wants His rhythms heard;
So the Torah offers poetic touches –
Like in this parsha, repeating “too muches.”  Who says it – each time?

The pans that all the rebels brought were made of holy copper;
So when they died the leaders couldn’t chuck them in the chopper;
Instead Hashem told Elazar to beat them smooth and shiny,
And lay them on the __________, to remind them if they’re whiny.

The kohanim were pure, surely not here at fault,
Given Hashem’s trust just like a bank vault;
And in ancient times when you’d never default,
This praise would be given, this promise exalt.
What, like Hashem’s word, lasts forever and makes everything “tasty” that comes in contact with it?