We seem to be having an on-top-of-things week around here for a change.  (um, ignore the fact that the kids in the pictures below are wearing pj’s please…!) 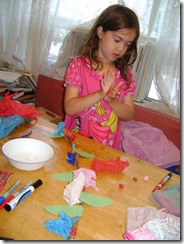 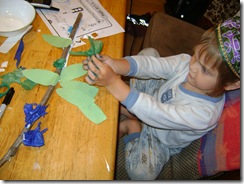 Since I have already read them the parsha overview and both kids did parsha copywork (yay!) about Aharon’s sprouting branch, we followed up with this super-easy craft project today.

In the parsha, the leaders of all the shevatim (tribes) bring a stick which is left in the Kodesh Hakodashim overnight.  All the staffs are unchanged except Aharon’s, which – in the morning – is sprouting buds, flowers and almonds.  And I thought, “we have all those things… even almonds!!!” 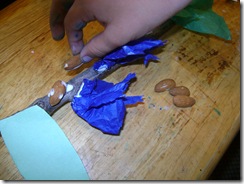 So here they are:  sticks.  I wrote “Aharon” on one side of each kid’s stick in Hebrew and “Levi” on the other side.  I cut out leaves from a folded piece of green construction paper, and let the kids make tissue paper buds and flowers (buds = wadded up into a tight ball; flowers = loosely pinched at the base).  Finally, we glued on almonds (use lots of glue!) and left the sticks to dry lying down for a while. 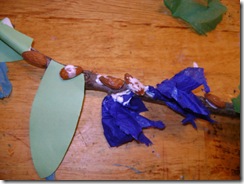 (As with any craft project, I recommend Aleene’s Fast Grab or similar “instant” glue – it makes a remarkable difference in the quality of the finished product when you’re dealing with kids’ 2-second attention span.)

When the sticks were mostly dry, after a brief almond snack, then lunch, I had each kid make a lump of dollar-store clay and we stuck the branch into the clay and left it to dry.  These are going to be centrepieces for our Shabbos table. 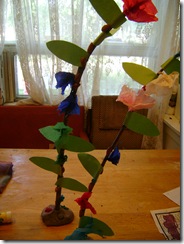 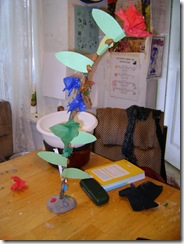 And the best part of all is, of course, my favourite part of ANY “green” craft project:  when we’re sick of looking at these, we can take them out back and dump them into the composter.  Okay, I worry about the glue, and dyes on the paper.  But honestly, I know for a fact that there are more toxic substances on the peels of the veggies I throw in there.  At least the craft supplies mostly say “non-toxic” on them, although, as I often tell the kids, it’s far cheaper to print the words “non-toxic” on a Dollarama craft item than it is to actually travel to China to see what goes into that item’s production.

All of which should not detract in any way from the greatness of this craft project.  There’s still a day or two to try it out… let me know if you do!!

(Challah crumbs says you can do a similar project with paper towel rolls, but honestly, who doesn’t have a stick nearby???  And half the fun is the REAL almonds – um, unless you have allergies in your house!) 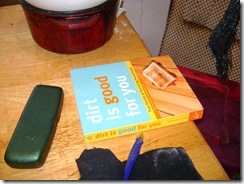 By the way, the book on the table in the background behind the branches is called Dirt is Good For You: True Stories of Surviving Parenthood, a loaner from my friend Rachel, which I’m greatly enjoying.  Just captivatingly fun stories of folks who parent to a slightly different drumbeat.  Not entirely orthodox by any definition, and yet – refreshingly counter to some of the more annoying Parenting Orthodoxies that predominate western culture.

So there you go:  a craft project AND a smart-mama book recommendation to go with it.  Have a great rest-of-week!