This is a basic overview of the parsha story in a format that can be adapted for a wide range of ages. Sources include parsha text, commentaries and midrash.  When introducing midrash or other non-pshat elements, I use the words “some people think” or something similar.

Since they came out of Mitzrayim, they’ve had three strong leaders: Moshe, Aharon and Miriam. Now they’re learning to do things for themselves, for a time when they won’t have those leaders anymore.

Do you remember the word tamei?

A few weeks ago, we read that people who were near a dead body couldn’t bring a korban Pesach – they were טָמֵא/tamei. The opposite of tamei is טָהוֹר/tahor. Sometimes people explain these words as “clean” or “unclean.” But you could be very, very clean – with soap and everything! – and still be tamei.

Kohanim who were tamei couldn’t bring korbanos or work in the Mishkan.

In the time of the Mishkan, things were different from today. The way of making people tahor again seems strange to us – it’s called a חֹק/chok, a rule we don’t understand. Nobody knows how it worked – but it did. Here’s how people became tahor again:

Many of the Torah’s rules make sense – but not the Para Aduma.

We keep Shabbos because Hashem did. Pesach helps us remember yetzias Mitzrayim. But a chok is like when parents say, “you don’t understand, but do it anyway.” At Har Sinai, we said naaseh v’nishma – we’ll do it first and ask later. We do what Hashem asks, even if we don’t understand.

Remember: “Okay, whatever you say, we will obey, right away!” (try it on parents, too!)

Now, something terrible happens. Miriam the neviah, Moshe and Aharon’s sister, dies in the midbar. Everyone loved her – they are terribly sad. But when they get thirsty, they realize – the well has dried up! The water had come through Miriam’s zechus – she was so great, she earned it for everybody.

In the midbar, people would die quickly without water!

Bnei Yisrael were used to being taken care of. Hashem had given them man and water and kept them safe. But now they were scared – so they did something rude. When a relative dies, we are aveilim: too sad to do regular work. But bnei Yisrael interrupted to complain about water. (Did you think they were done complaining when Hashem proved Moshe & Aharon were His chosen leaders?) 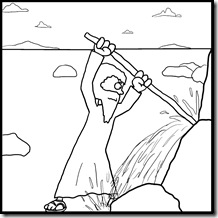 But: Hashem asks His tzaddikim to be better than other people.

Hashem showed Moshe a rock and said to speak to it and the rock would give water. But when Moshe took the people there, maybe he was sad, or angry, he HIT the rock.

Is that what Hashem asked him to do???

Water came out – but Moshe was still punished. Moshe did not behave like a tzaddik or a good leader, so Hashem said that he and Aharon could not lead the way into eretz Yisrael. They would never get to go to the land. Have you or your friends ever been to Israel? Moshe never did.

Moshe took Aharon and his son Elazar up on a mountain. Elazar put on the bigdei kehunah – he was kohein gadol now. Aharon died, and everyone wept. Some say Aharon was loved best for being a rodeif shalom: ending fights and helping enemies become friends.

But Moshe was still alive, wandering with bnei Yisrael through the midbar.

Some kings feared Hashem and let bnei Yisrael cross their land; others were stubborn and refused. When the king of Edom refused, they went the long way around instead of fighting. Some people complained to Moshe that they’d be wandering lost forever – they even called the man “rotten bread!”

Hashem sent snakes to bite the complainers. Everyone who was bitten died!

Once more, the people did teshuvah and begged Moshe to save them. Moshe made a copper snake (the word snake, nachash/נְחַשׁ, is inside the word copper, nechoshes/נְחֹשֶׁת!), held up on a pole. Everyone who looked at the copper snake was healed.

The next time a king refused, Hashem told them to fight!

They fought Sichon and the Emori people, and won – so they went through that land, and others, too.

So some of the other kings in the area started to get nervous…as we will see next week!