Walking with Israel, with Jews for Judaism 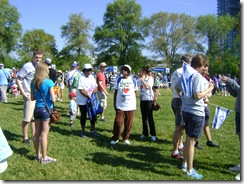 I think this event used to be called Walk for Israel, but they changed the name a while back to Walk WITH Israel, and this year was apparently the 45th (I think) Walk held in Toronto.  This year, I volunteered to walk with Jews for Judaism, a counter-missionary organization that also works hard to educate Jews about Judaism – and why Christian claims about the “Jewishness” of Jesus are completely false.

The missionary organizations love getting a foot in the door of communal acceptability by maintaining a presence at these events, and Jews for Judaism (the good guys, though everybody gets the name mixed up!) tries to have more counter-missionaries just standing by peacefully, offering information if anyone is curious, and making sure the missionaries know they’re being watched.  For the most part, they are probably just plain nice people who care deeply about Jewish souls.  Luckily, Jews for Judaism are as well.  There were 3 or 4 missionary groups down there today, depending on what you mean by group, because some of the people knew each other but weren’t walking together.

Each Jews for Judaism group was assigned to one missionary group to “tail” throughout the walk.  We were advised to stay 6 feet away and to remain friendly at all times.  Easy enough; none of the groups were militant or even particularly well-educated about Judaism at all.

The ones my group was assigned to had shirts that read, in the front, “lechaim” (in Hebrew letters) and on the back, “ask me about my rabbi.”  A few people wandered past, interested, but most quickly realized and steered clear.  A few people muttered derisive remarks – one called them “beheimas” (animals). 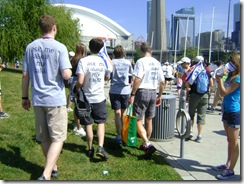 (I spent a lot of time watching these shirts)

The thing of it is that, as peaceful and buddy-buddy as the whole event was (the missionaries were shaking hands with, no, practically HUGGING the people in charge of Jews for Judaism – they are well-acquainted from previous events), these guys HATED having me standing so close to them, in my prominent t-shirt and flyer bag.  At several points, the leader would take off at a sprint to try to lose me.  I love a challenge, and I was able to catch up every time except near the end, when I decided I was hot and exhausted and wouldn’t bother.  They probably felt like they won.

What did they get out of running ahead?  (or back – at one point, they sprinted BACK a block and a half to lose me)  I guess the opportunity to stand on a street corner and smile, looking friendly, let their t-shirts speak for themselves for a minute, without interference.  And, of course, the goal of Jews for Judaism is also a strange one – it is, in part, to boost morale in the community, make the community aware that there IS a Jewish response, that we know who the missionaries are and what their strategies are as well.  That Judaism, not some watered-down, Hebraicized Christianity, is the answer to just about any Jewish question.

Still – it was all pretty buddy-buddy.  Here is everybody at a rest stop where – by the way – I had just missed seeing Ted and the kids.  They came for a little while, but started after the beginning, ducking out after the end.  I actually did see them further on, but even shrieking Ted’s name violently from across a park failed to catch his attention.

Anyway, here’s everybody at a rest stop.  Pale blue shirts are Jews for Judaism (the good guys); the woman in the grey shirt is a missionary; her shirt reads, in Hebrew, “they call him Yeshua.”  Because privacy laws are not in effect during a parade (which the Walk With Israel officially is), you can take pictures of anyone you like, and they cannot really object.  At one point, the missionaries were taking pictures of the Jews for Judaism group taking pictures of them… and vice versa, everyone with smiles on their faces. 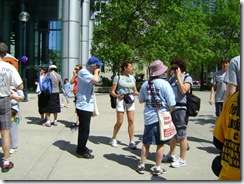 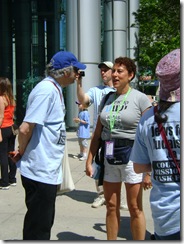 Not quite so buddy-buddy was the END of the walk, which featured this chillul Hashem display of clashing ideologies between Neturei Karta and the Jewish Defense League… two loopy organizations going head-to-head at last.  Luckily, the police arrived first and erected this strange yet effective barrier of bicycles between the Neturei Karta drones (they were, literally, droning) and everybody else. 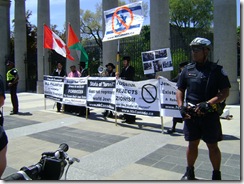 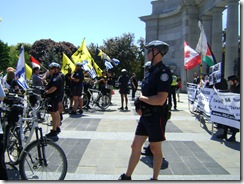 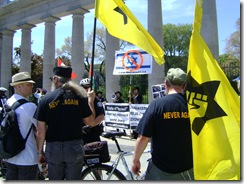 Listen to the excitement!

But after walking for 3 hours, even a nice controlled riot couldn’t keep me downtown when what I was really longing for was… 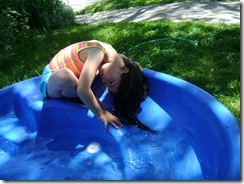 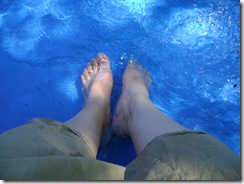 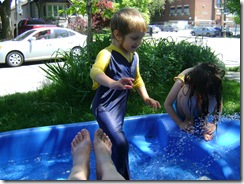 Ah!  The water was freezing, the shade was dappled; it’s good to be home – if only for a few hours.  Fireworks tonight – yay!