Welcome to the Book of Numbers… a special Quiz that’s all about Counting! 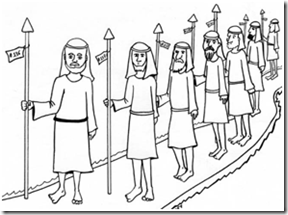 Count the soldiers, Hashem asks,
Be sure our side has plenty,
But do not count the youngest men
Whose age is less than __________!

The parsha gives us helpful counts
Each shevet’s soldiers, large amounts,
But one thing’s still not clear in sight –
How old are those too old to fight???

Now while we’re counting, don’t you forget
If you don’t know the number yet,
You can’t just point and number Jews;
So how to count and know who’s whose?

Here’s a question to ask at your seudah,
The biggest shevet was Shevet Yehudah,
But who’s the second-biggest one?
You’d guess right if you said… __________!

Think we’re done counting?  Just hold up a bit
Read through those names again lickety-split;
We’ve learned all the names, but if you check the list,
Two new names appear here from one that’s dismissed!  Who are they?

Shevet Levi’s set aside, marked for greater things,
So different rules for Levi our weekly parsha brings
Count not just the grown-ups, but little babies, too;
This woman’s birth so long ago shows us why it’s true.  Who is she?

STUMPED?? Here are some answers:
[ 1a ] Twenty
[ 1b ] Bamidbar Rabba, the Ralbag (Gershonides) and the Ramban (Nachmanides) concur that the upper age for army service was sixty.
[ 2 ] Rashi (1:2) says that just like in Shemos, they were counted by giving half-shekel coins.  As it says in Hosheya 10:1, “bnei Yisrael… shall neither be measured or counted.”
[ 3 ] Dan.
[ 4 ] Efrayim and Menasheh appear instead of Yosef, bringing the count back to 12 shevatim after Levi has been removed and counted separately.
[ 5 ] Yocheved.  Rashi (3:15) says that she (a member of Shevet Levi) was counted just moments after birth among the 70 Jews who descended into Mitzrayim.