Before we go… farewell to Sandy McTire 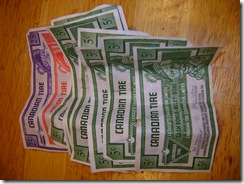 Now that aliyah is becoming more of a reality, I’m thinking I have to move ahead on my lifelong dream of saving up enough Canadian Tire money to buy a chocolate bar.

I know… this sounds like a pretty small dream.

It’s just one of those things, you know?  My brother mentioned this delightful possibility to me probably about 35 years ago… that you could save up enough Canadian Tire money to buy a chocolate bar, and nobody could stop you from paying for it that way at the checkout!!!

It’s been in the back of my head ever since.

At first, it was just the titillating thought of owning a chocolate bar.  Later, it was the thrill of getting a free chocolate bar.  Now…?  Well, now I think I’d do it for the irony, and the sheer Canadiana of it. If you’re not from here, you may never have fondled Canadian Tire money, and you must know, you are really missing something special.  These are REAL MONEY, actual banknotes, which I believe are actually printed by the genu-wine Canadian Banknote Company in Ottawa.  They look and feel exactly like money, except they have this goofy Scottish guy, Sandy McTire, on the front… (Scottish, apparently, because that means frugality!)

Oh, and the denominations run from 5 cents all the way up to maybe $1.  Just like with many store loyalty cards, you earn a percentage on every purchase – only, in this case, you get actual printed, textured, timeworn bills… maybe a nickel’s worth, if you’re lucky.

The best part of Canadian Tire money is that even if you buy something WITH Canadian Tire money, the cashier is obligated to give you your percentage back in Canadian Tire money at the end of the transaction.  So you never walk away empty-walletted.  Imagine if REAL money was like that?  “Hey, excuse me, sir?  Your stamps cost $10, so here’s 50 cents back!”

Now, I know these are exactly the same, monetarily, as a coupon or Airmiles or whatever kind of loyalty discount other places offer.  I know you are paying for the discount in other ways.  And I know it may be smart marketing on their part to convince savvy consumers like me to hold onto these things at home, saving them up (and, they likely hope, LOSING them), rather than turning around and just taking a nickel off every time they make a purchase.  I know all that.  But it’s still exhilarating… the thought of that chocolate bar, waiting for me, at the cash register.

Because that’s the other thing – as a kid, Canadian Tire had way less appeal to me than just about any other store.  The stores reeked strongly of motor oil and fertilizer and the metallic tang of too many kinds of nails all in one place.  So although my brother and I were initially fascinated by the “real” money, we soon realized that, like the dozens of pesos and rupees stashed under my father’s bed, these could NOT be converted into what we really wanted:  cold, hard chocolate.

But at some point, hanging around on his way out of the store with my father, Eli must have noticed the small rack of candy and gum by the cashier, right near the air fresheners.  And he told me.  And the rest is history.  Pictured above is NOT my entire stash.  I have been rounding this stuff up slowly but surely since before Pesach.  I think I am nearly there.  Chocolate bar, here I come!