A beautiful book we’ll be avoiding, thank you 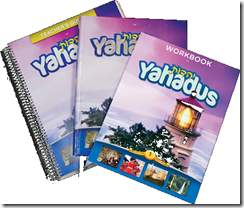 I’d heard of these books before I saw it in person at the Torah Home Education Conference two weeks ago in Baltimore.

It’s called the Living Lessons Yahadus Curriculum (Yahadus = “being Jewish”), and let me just say, it’s BEAUTIFUL.  If you’re used to dingy Jewish texts, it will blow you away.  The images are full of the wonder of Hashem and the glory of His world.  It’s nice that they’re so beautiful because, with two levels that each include a text (about $50), workbook ($20) and teacher book ($65), this can quickly become a VERY expensive curriculum.

To the publisher’s credit, there is a homeschool package available for $199.  And our kids’ Jewish education is worth spending money on, right?

Technically speaking, the books cover the mitzvos in the Rambam’s (Maimonides’) Sefer HaMitzvos.  The publisher originally bragged that kids could “learn the ‘entire Torah’ in 4 years!” but it looks like this is going to wind up being a 5-year program.

There was a ripple of excitement in the frum homeschool world when these books were announced – though, perhaps, more hesitation than in the mainstream Chabad world, which is who is creating and publishing them (the vast pint-sized empire of Tzivos Hashem, Merkos l’Inyonei Chinuch etc).  Still – the promise of a comprehensive Jewish-studies curriculum resonated (and still does) with BTs, FFBs, and everybody in between.

Volume 1 covers the sections of Madda and Ahavah, while Volume 2 includes Zmanim, Nashim, Kedushah and Hafla'ah.  There are three more volumes planned to finish up the entire Sefer.  They are geared towards students between 4th and 8th grade, with the intention that one book would be covered each year… though there’s obviously a bit of flexibility.  (so multiply that homeschool package of $199 by five grades – ouch!  though you could amortize it out over multiple children… if you have 8 kids, it’s only $125 per kid, not including shipping!). 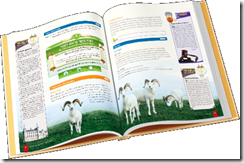 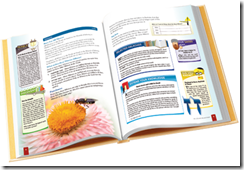 The lessons are very slick and seem to be well-written and edited. There are sample downloads available on this page.

However, if you download the sample, you’ll quickly notice the worldview (hashkafa) which pervades the books may be a little – um, intense – for some kids.  For some families.  The chapter deals with kiddush Hashem, sanctifying Hashem’s name, and it immediately goes into an extensive discussion of when one is obligated to give up one’s life.  Oh, there is LATER a sidebar on behaving properly as a kiddush Hashem, but it is a minor point compared to the pages and pages dedicated to past massacres and the bracha for giving up one’s life in public.

This is a book to be used in Grade 4, with kids perhaps nine years old.  They will, no doubt, be excited to know that “Even if a person went against the Torah their whole life, if they were killed al Kiddush Hashem, they go straight to Olam Haba!”  Indeed, a section at the very end explains that even though there are only three aveiros for which one MUST give up his life rather than transgress, there are meritorious examples of tzaddikim going “above and beyond” and dying for other mitzvos as well (the book does point out that this contradicts the Rambam).

When the books came out, there was actually a lively discussion on the TORCH-D (Torah Homeschooling) list about the book’s intention, and a couple of parents pointed out that it’s not TELLING kids to give up their lives, just explaining an unpleasant but necessary area of halacha.  In any event, while martyrdom may or may not be an appropriate topic for kids this young, that wasn’t what made up my mind, as I flipped through these beautiful books at the Torah home education conference.

I wish I’d taken a picture of the page, but basically, about midway through one of the workbooks, I flipped randomly and came up to a page that showed a family – a mother and daughter on one side (and I was thrilled, by the way, that there ARE pictures of women and girls, though there most images are male), and a father and son on the other.  And there was a list of four “household duties,” which I also wish I remembered properly.  One was probably something like cooking (?), but I definitely remember another – Torah study.

And the student’s job was to draw a line from each task to the parent who was supposed to be responsible for that duty.  And just to make sure you understood what was what, the line was already drawn, as an example, between Torah study and the man of the family.  Don’t worry, girls – your husband will earn your olam ha-ba with his learning.  Hey, and don’t worry, guys – you’ll be well-fed for life as long as you find the right woman.  I showed it to Elisheva, who made appropriate gagging noises, and then we put the lovely books down and walked away, disappointed.

Now, is it hypocritical to call something so small a deal-breaker in a Jewish text given that, in other areas, I quite contentedly use, adapt and work around Christian curriculum all the time?  I’m open to that possibility.

I’m not going so far as to say there’s anything necessarily wrong with this curriculum – hence the title.  I have confirmed with my own eyes that these are beautiful, if expensive books.  I saw one post somewhere that mentioned typos, but my super-cursory glance did not in fact reveal any.  The illustrations and colours are lively without being distracting and there’s a good balance between halachic discussion and anecdotal / story type material.

However… far from telling anybody not to buy it, I will say that this curriculum may be exactly what you’re looking for, and goodness knows, I have been railing long enough about why Jewish studies materials can’t be just as beautiful as secular ones!  But I would suggest – though the Internet is SO wonderful for bringing books from afar and UPS / Purolator / FedEx are my homeschooling best friends – that this is a series of books that you need to see in person before you make the decision about whether they’re right for you and your family.