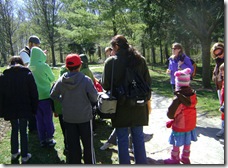 Looking at my spreadsheet, it’s hard to believe that I have organized FIFTEEN homeschool field trips this year – that’s more than 1 a month.  Indeed, there are two this month – one this week and another next week.  Here’s a complete list, while I’m feeling braggy:

Today was our second Humber Arboretum trip of the year.  Last year, we came three times, but this year, we did a maple program somewhere else.  It’s nice seeing the children totally at ease now in this familiar setting.  I had a couple of drop-outs and flake-outs (ie people who have a million excuses and then don’t pay), so it was a slightly smaller group than usual, but the minimum number of people is 20, so I didn’t feel terrible.

They do a classroom component and then you go out and schlep through the woods.  Today, we actually stuck mostly to the sunny, non-wooded areas, which was nice because it was a VERY chilly day.

Mostly, Gavriel Zev kept to himself or hung out with a 4-year-old friend. 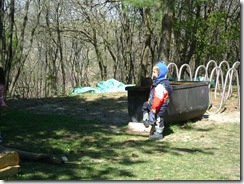 Naomi has a special “field trip friend” she enjoyed hanging out with – just to her left in the first picture. 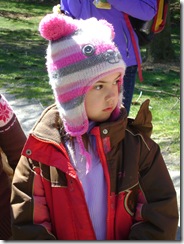 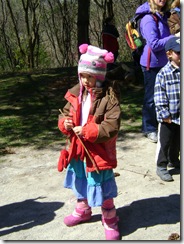 We saw the most beautiful hawk circling the pond and I actually managed to catch a picture of it (look closely, or click to enlarge) just after it splashed down to catch a fish or something in the water. 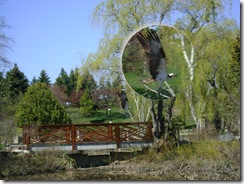 The friends we were with on the bridge watching the hawk actually brought along notepads, colouring supplies, etc., so they could sketch in situ, but I had the kids do nature drawings and VERY short narrations when we got home: 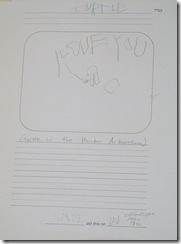 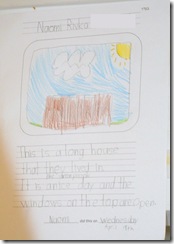 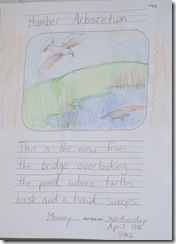 Gavriel Zev’s is hilarious.  He drew a turtle we’d seen, but the turtle is saying “I love you.”  I told him he could make the title something like “turtle” or “Humber” and that I’d spell it for him.  He said “I know how to spell TURTLE!”  And indeed… perfectly!  Then, he was sick of writing, so he abbreviated his name at the bottom (“Gavl”) and the date (“W”)!

Even though I said to draw something we’d SEEN, meaning something in nature, Naomi drew one of the Huron longhouses we were learning about.  We didn’t actually SEE one, except in pictures… but hers is good enough anyway.  She learned something; that’s good enough.

I wanted somebody to paint, and brought out the watercolours, but nobody was motivated to do it, so I grabbed the watercolour markers for my own illustration, which I think came out not too badly… for someone with ZERO drawing talent.  It’s always great to have toddlers to compare your drawings against!  (as long as I don’t look at Ted’s art, right?)

Anyway – good times had by all.  I like going on trips so much it ALMOST makes up for the hassle of organizing them and dealing with people’s flakiness.

Here’s a question I’ve asked before:

When it comes to homeschool field trips, are you a lone wolf, or a pack wolf?  Do you prefer to go it alone – spontaneously, away you go! – or have others along to share the experience (and resources, like teaching staff)?