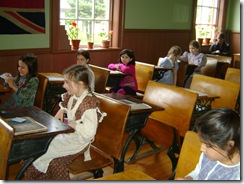 Yet another homeschool field trip, our last for a while, because I’m off to Baltimore next week.

This was FUN, despite several last-minute cancellations bringing our group size down to 13 kids (though this meant we could sneak along a friend’s kid for free!) and horrible weather so we couldn’t enjoy the usual outdoor recess with period games and toys.

Most of the kids didn’t know how to spell; with the unschooly bent of most homeschoolers here, the spelling bee the schoolteacher organized was a bit of a joke.  Even after practicing the “list words” for fifteen minutes (writing them, reading them, saying them aloud), most of the children were still guessing letters somewhat randomly, like a G in the word “rain.”  Naomi Rivka did fine; her word was “ring,” which she spelled on the first try.

Despite this, I respected the fact that the parents did not jump in at all to “rescue” their kids from potentially embarrassing situations.  Perhaps that’s part of the philosophy – if they feel pressured to read, and see younger kids doing it, maybe they’ll start on their own?

In one case, though, a child was spelling “pain” and pronounced the first letter “bee.”  I happen to know the family has only been in Canada from Italy for about 2 years, so when the teacher tried to buzz him out, I spoke up.  She had asked him if he meant “b” or “p” and he said, “bee as in purple.”  It was obvious that he knew what he was talking about, but because he didn’t have much of an accent, I guess she just thought he was dumb, or strange.  Otherwise, the teacher was great, and flexible enough to deal with the kids’ wide range of ages and abilities. 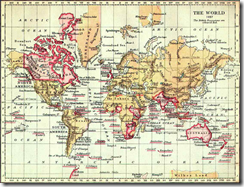 I also think none of the kids will forget the words to “God Save the King” anytime soon!  The teacher first showed the kids the words, played the music on the piano, then we sang the words to rehearse them.  THEN we did the whole thing again for real when she rang the bell to start the actual school day.

It actually felt a little grim singing with the word “King”, like we were rehearsing for the demise of Her Majesty Queen Elizabeth.  Throughout my lifetime, since before I was born, we have always sung “God Save the Queen,” but someday perhaps in not too long, and perhaps for most of my children’s lifetime, the words will indeed change back again when Charles or Harry or whoever take the throne.  We also enjoyed the Victorian map of the British Empire, which would have been proudly displayed, along with the Union Jack and pictures of said king, on every schoolroom wall in the empire.

What was especially nice was that the teacher let the kids choose name tags of actual students who attended the school back in 1910.  Naomi’s student, Florrie Harrison, was a young girl just a bit older than she is now.  They have pictures of the kids on display, so they could see who “their” student was and that helped make it really concrete.  The teacher also talked a bit, coincidentally, about the student Naomi was named after, who came back in the 1980s to share her recollections when they were first setting the schoolhouse up as a museum.

In 16 years of having daughters, this is literally THE FIRST time I have braided hair.  Pretty good for a first-timer!  And she has perfectly captured the grim expression of an Edwardian schoolgirl on her way to face her certain doom. 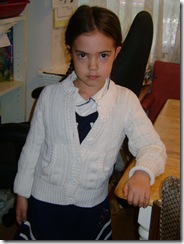 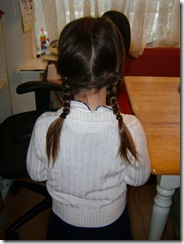 But afterwards, she was very, VERY excited, and said we’d have to come back again.  I said, “maybe next year,” but the let-down expression on her face showed she’d probably meant something like tomorrow.