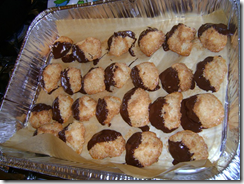 This is actually a repost from my bread blog last April, of a recipe I have been making for at least 3 years, since I learned the basic outline of it from a Bonnie Stern Pesach cooking demo (she uses almonds, but I sub finely-ground coconut (unsweetened)). 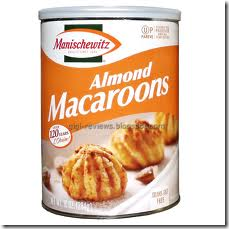 I know they sell (relatively) cheap macaroons in tins at this time of year, but believe me, don’t even TRY to substitute those if you’re craving a real, crunch-on-the-outside, almost-gooey-interior macaroon.  Those canned ones are just plain “sweaty,” both feeling and tasting, through and through.

Besides, these are absolutely the easiest, I promise.  No whipping!  Just stir and bake – they will be the easiest part of your Pesach cooking.

What’s your go-to Pesach baking secret???  Hope you’re not sick of coconuts yet!