Here is Gavriel Zev with one of his inner circle, “Miss,” which is what he calls this blonde sleeveless Groovy Girl, singing an Alef Bais song.  This is not the one we sing together when we learn a new letter, but it’s currently the kids’ favourite, having been featured in Naomi’s Alef-Bais Siyum Video a couple of years ago. 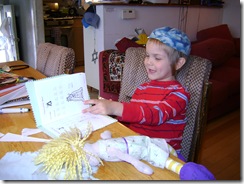 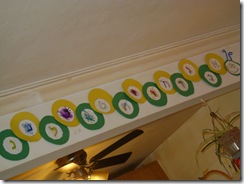 Our new letter today was actually TWO letters – mem and nun, because we sorta-kinda did mem the week before Pesach, which fit perfectly with Mah Nishtana, but I was too busy to really sit down and do any actual schoolwork with either of them.  So we caught up with two this week.

Gavriel Zev is a kid who HATES colouring, so to colour one letter each week is sheer drudgery, even though I have suggested many ways to liven them up.  Naomi was infinitely more creative when she was colouring hers, drawing little pictures or patterns, using watercolours, dot-dot markers, whatever she wanted to make each one colourful and varied.  Each week, GZ makes excuses about why he shouldn’t have to colour in the letter, and asks me repeatedly if I can put it up without.

GZ was enchanted with the concept for about three seconds, excitedly choosing “blueberry” and “lemon” markers to colour the letters.  Then, he sat down beside me and said, in a quieter voice, “I think the Wiggle Worm is SO hungry that she doesn’t mind eating cookies with NO flavour this week.”  I said, “oh, no… she is SO MUCH looking forward to the flavours of her cookies.”  So he sat down and quickly coloured in the letters and pasted the back with glue stick.  Yerachmiel Meir stuck the mem up himself, then actually lifted GZ up so he could paste on the nun, which I thought that was super-sweet for both of them – wish I’d gotten a picture.

I was amazed, listening to how strong and self-assured GZ’s voice has become, and grabbed my camera to capture the moment, BUT I must warn you: this video gets a bit silly towards the end… and then cover your ears - there is a very piercing scream near the end.  When I heard it just now, I thought, “some mother should come in and DO something about that kid!”  He is still very much a screamer, and I am still somewhat inconsistent about dealing with it.  Sometimes, he gets spanked.  Sometimes, he gets hauled out of the room… and sometimes, as in this video, he is apparently simply indulged.  Blah.

The "baby voice" he's referring to near the beginning is a reference to Naomi’s Alef-Bais video, where he pops up right at the very end, after the credits, to say "Thank you, Alef Bais!" in what was indeed a bit of a baby voice.  I love hearing how his voice has changed now.