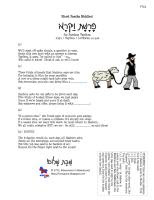 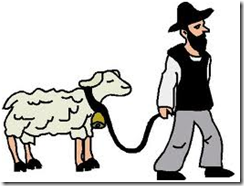 We’ll start off quite simple, a question so easy,
Begin this new book with an answer so breezy,
Vayikra, it says, “he called to him” – so…
Who called to whom?  Shout it out, so we’ll know!

Three kinds of beasts that Hashem says are nice,
For bringing to Him for your sacrifice;
A cow or a sheep might each take your vote,
But remember, you also can bring Him a __________.

Hashem asks for our gifts to be given each day,
Five kinds of korban (these days, we just pray);
Some if we’re happy and some if at fault,
But whatever you offer, please bring it with __________!

“If a person sins,” the Torah says: if someone goes astray,
If a kohen sins, or makes a mistake, it’s simply not okay;
If a leader sins, we learn this week, he must return to Hashem,
We all make mistakes BUT, we see – He still __________ us and them!

The kohanim would do, each day, all Hashem asks,
Sweep all the sweepings, accomplish their tasks;
But this job was said to be hardest of all –
Named for the finger right next to the small!

STUMPED?? Here are some answers:
[ 1 ] Hashem spoke to Moshe.  Told you it was easy!
[ 2 ] Goat.
[ 3 ] Salt.
[ 4 ] Loves!  Or any other word, like “forgives” that fits in the sentence.  You pick!
[ 5 ] 2:1 – קְמִיצָה – in Hebrew, it means your ring finger, but in the Mishkan and Bais HaMikdash, the term was used to refer to the special “open fistful”with which the kohanim would have to measure and carry the flour for the korban mincha (see Rashi).