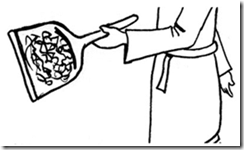 To take out the trash can be such a big bore,
Yet the kohanim would fight for this chore;
Up the steep ramp, the kohen – quick! – dashes,
To sweep with his broom and scoop up the __________.

I’d like to duck and run away when the oil comes near,
“Must you pour it?” I beg him, my brother daft and dear.
“Yes, I must,” he tells me now, and asks me to stand still,
And though it’s oozing down my neck, he said it, so I will.  Who are we?

It’s not enough to feel a feeling, when you’re in the mood,
It’s not enough to say you’re sorry, if you have been rude;
Instead, Hashem tells us we can’t just sit and know it –
March to the Mishkan to give a __________, to really, truly SHOW it.

The kohanim were holy, a specialized breed,
Set apart for fulfilling Hashem’s every need.
When they did a mitzvah, it surely was with love…
So why did Hashem start this parsha out by saying “Tzav!”???

STUMPED?? Here are some answers:
[ 1 ] Ashes – this mitzvah, trumas ha-deshen, was prized and honoured despite its seemingly lowly nature.
[ 2 ] Neveilah (נְבֵלָה ) or Trayfa (טְרֵפָה), animals that have died or been killed.
[ 3 ] Moshe and Aharon.
[ 4 ] Korban
[ 5 ] The kohanim received a share of almost every korban, but the Olah, with which the parsha opens, was wholly consumed and so could have been perceived resentfully as a waste.  Rashi says the strong word Tzav urges them to follow the rules meticulously, despite the perceived monetary “loss.”