New “Middah of the Week” Program: We Choose Virtues REVIEW 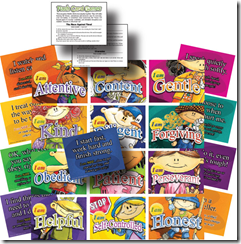 One thing we haven’t been consciously focusing on in our homeschool (heck, in our FAMILY) so far is middos – character traits.  In my Ashkenazi Hebrew, these are known as “middos,” which is actually an implied abbreviation of “middos tovos,” GOOD traits, because you wouldn’t accidentally want to instill BAD ones, now would you?

Now, before you jump on my back – YES, I’m sure there are specifically Jewish programs on chinuch.org and elsewhere that are lovely.  But I saw a bunch of recommendations for this Christian / secular program called We Choose Virtues, and decided that, rather than shop around to find or make the equivalent, I was doing things the easy way for a change.  This program was both cute and inexpensive enough to give it a try.

I ordered just the most basic set of twelve flash cards promoting various middos in a first-person, active, positive way (a list of the specific middos follows).  Each week, just as we introduce a new Hebrew letter for Gavriel Zev’s wiggle worm, we take out a new card… and it’s fast becoming an exciting part of the week around here.

The front of each card contains a positive statement:  this week’s is “I am Attentive.”  On the reverse is an easy catchphrase:  “I watch and listen carefully.”  There are negatives underneath:  “I am NOT… forgetful, distracted or distracting and I don’t ignore or interrupt!”

There’s also a Biblical verse on each card.  This week’s is from Mishlei/Proverbs:  “Pay attention and listen to the sayings of those who are wise.  Apply your heart to the sayings I teach.” Of the twelve cards, two have verses from the Christian Bible, which I’ll have to replace before we get to them (the website says “We chose a predominance of Old Testament verses specifically for Jewish families and classrooms”… hmm… maybe they think we’re so great we don’t need the other two virtues!!).

Lazily, I shuffled the Christian ones to the back of the deck, giving myself ten weeks to figure out replacement verses.  However, if you are uncomfortable with this, there is also a completely secular option, intended for use in public schools and in homes of other religions, that contains NO Biblical verse at all.  I chose to get the version with the verses thinking I may as well tie it into the Torah, even if I have to cleverly fake it for two of the cards.  (My plan is to find and print comparable verses from the Tanach in a comparable font and stick them on well using shiny-clear packing tape so they’ll never come off.)

I was also concerned, before they arrived, about what the cards would have to say about “Forgiving,” a virtue that many Christians interpret quite differently from the way Jews usually read it.  It’s not that we don’t love to forgive, but we generally believe there’s a step that comes first – it’s called an apology; teshuvah, sincere repentence.  Some Christians emphasize this; others don’t, and offer a more extreme “turn the other cheek” forgiveness that I find masochistic and unhelpful.  Anyway, the card itself is neutral, saying only, “I choose to love when others hurt me.”  Fair enough.  And the verse is from Tehillim/Psalms 25:11:  “Lord, be true to your name.  Forgive my sin, even though it is great.” 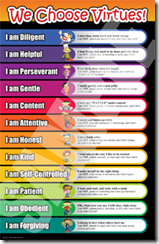 So what are the virtues?

For my own interest, I was also curious to see how well they mesh with the “13 Middos of Hashem” that we sing about in “Echad Mi Yodeia” at the Pesach Seder, and sing over and over during Selichos and on Yom Kippur as the “13 Attributes of (divine) Mercy” (more on Selichot here).  Thanks in part to this site, and this one, and Wikipedia, I found some pretty interesting parallels between Hashem’s attributes and the ways we can improve our own behaviour.

Of course, as with any such classification, these are somewhat arbitrary, but some really do seem to fit quite nicely!  Feel free to swap these ideas around in any way that appeals to you.

So there you go – a total Jewish AND secular “character” curriculum! 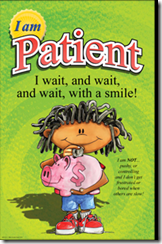 You can see that the materials are very, very cute.  The kids really like “meeting” the cartoony children each week and handling the cards themselves, turning them over and repeating the sayings.  I keep the current one in our “Today is” wall chart for easy glancing as we walk past.

Some of the products that I didn’t buy go into more detail and provide some background about the kids depicted on the cards and how they are demonstrating the virtue.  The card at right shows the “patience” girl, but our flashcard (you can kind of see it in the picture at the very top) only shows a snippet of her head and piggybank.  Presumably, she is patiently saving up her money… but I’ll never know for sure unless I buy more of the program. 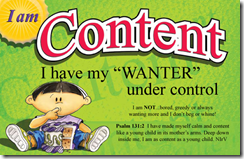 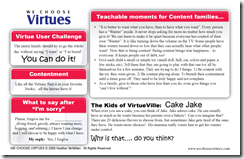 This card, for instance, shows “Cake Jake,” and on the back, explains that Jake adores cake, and his parents own a bakery, so he can have as much as he wants.  They have many flavours, but sometimes, he wants MORE flavours.  So he is supposed to be working on being content with the riches he has and presumably not think about other flavours (though if Ben & Jerry had been content with regular flavours, we’d all still be eating vanilla).  I think most of the cards are pretty self-explanatory, and if not, we can make up our own stories about the kids on the front.  This will teach us to be content with the flashcards we have and not crave the $70 faith-based family kit!

Even just the basic set of flashcards really isn’t cheap, though they are well-made and were delivered very quickly.  BUT if you think of it as a springboard for character-building discussion… well, it’s still not cheap.

But it may well be worth it, especially in terms of giving your kids the vocabulary to talk about themselves and others in constructive ways.  (instead of just saying they don’t like somebody – without naming names, of course, unless they’re analyzing a fictitious character! – they can try to pinpoint their character flaws… or they can praise a person they know or read about using the “virtue” terminology they’ve already learned.

One thing I know is that we are DEFINITELY in painful need of some kind of revolution around here, in terms of how we treat each other.  And that may well start with me.  I’m hoping that calling attention to middos every single week will improve me at least as much as it improves the kids.  Indeed, I am well aware that I am the only person I truly have the power to change.

So how’s your family doing, middos-wise???