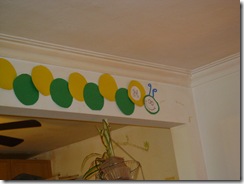 If you’ve been with me for a while, you’ll remember way back to the fall of 2009, when I started this super-cute Alef-Bais Wiggle Worm project with Naomi Rivka.  We added one letter to it each week, learning a new letter and “alef-bais song” every week and occasionally learning words or doing projects when I had the energy (another post here).  At the end of our study, after 22 weeks and 22 letters, we even made a special party, an alef-bais “siyum” and a video, starring Naomi Rivka herself!  (see my videos for the occasion here)

Well, that was her “official JK year,” and I figure since Gavriel Zev is now JK-age, he needs a wiggle worm of his own!

I cut out the 23 little circles plus a tail, and Ted mounted them in the same spot on the wall, by the ceiling.  He didn’t realize what he was doing, but mounted them in the oddest way, so that instead of a wiggle worm, it looks more like a “zig zag worm,” but Gavriel Zev is thrilled to bits nevertheless…

This week, we officially started with Alef… appropriate for me because I lost my voice on Monday and wasn’t able to speak or make any noise, let alone sing a song to go with alef.  So a silent week, for a silent letter.  Hopefully, I will have my voice back to normal for this Monday when we begin with the letter Bais and the song Baruch HaMakom, a “bais” tradition going waaaaay back to YM’s JK year!

I am also looking forward to doing more kinesthetic activities this time around with GZ, because he’s so much more of a “touchy” learner.  He would definitely enjoy doing plasticine letters or writing in split peas in the bottom of a basin.  Naomi tends to be more visual and impatient – like me, once she “knows” something, she doesn’t like being told it again and again.  GZ, on the other hand, learns quickly but still enjoys touching, touching and hearing things over and over.

So it’s the same project, but very different kids, and I’m looking forward to 22 weeks of alef-bais learning fun!