My hobby-o-the-moment… (as of, um, midnight last night) 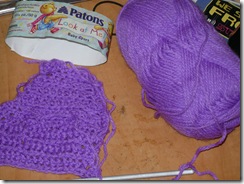 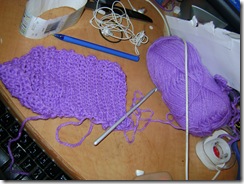 I come from a long line of talented crafty-knitty people… but I’ve always known I’m not one of them.

Technically, I have knitted before.  Once, as a kid, I was in a yarn shop with my mother (yarn shops are one of her favourite places in the world to hang out), and the ball of ice cream perched in my cone (pralines and cream?) fell off and plopped itself in a bin of what must have been discount yarn.  Thus, I ended up with my own godawful orangey acrylic yarn.  At some point, one of us decided it would be good if I did something useful with it, like knit a scarf.  My “scarf” grew to about an inch before I gave up.

So it is with a bit of trepidation that I embark, maybe 30 years later, on a NEW scarf… still in acrylic, because it’s all my mother would part with.  But at least it feels nice, and she gave me a hook to go along with it.  I love the fact that most people, if they want to try a new hobby, would have to go out and buy something.  I just have to mention it to my mother and she opens her stash to me.  I never even knew she crocheted; I just knew she had a bunch of hooks, but apparently, she has crocheted.

Growing up, I always thought of crochet itself as somewhat godawful, like the scratchy round cushions in my Bubby’s “den” (that’s what people of her generation called the TV room – they all had dens, like they were foxes instead of just regular Jews).  Where knitting is upperclass - elegant, refined - crochet is lower-class, the thing people do when they can’t afford a second needle. 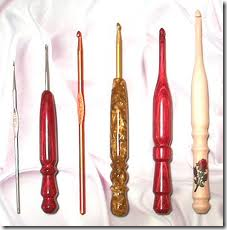 So here I am, and today, thanks to this site and this video channel, I learned how to do a basic stitch.  I also have a bunch of books coming from the library, but who wants to wait for books in this day and age???  The most important thing I have learned is that if you want to be a Cool Crocheter, as opposed to one of those lowest-of-the-low ones, you have GOT to get yourself a fancy hook. Mine’s in the picture above.  It’s metal, with a flat bit in the centre.  It’s not fancy, not at all.  Oh, you can DIY, but the cool crafters Will Know.

In case you’re wondering how practical learning to crochet is in this day and age, you’ll never wonder again, because you can use it (along with a humble onion bag) to create this awesome Reusable Mesh Produce bag! 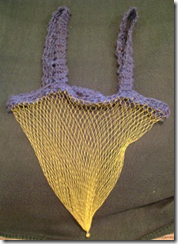 Now, I don’t want you to think I’m dissing this project, because it’s indeed very cool, but you are basically starting with a produce bag (albeit not a very reusable one) and ending with a produce bag (that can be reused until the handles fall off).  To me, it looks a lot like the British “string vest” style undershirt: 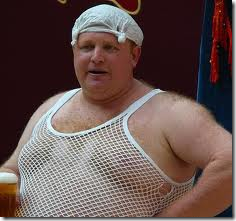 So I’m thinking that you could probably just cut the bottom open if you wanted yet another use for crochet… (love the gumby hat!!!)

Ah, but I joke.  It’s fun, fun, fun indeed to have a new hobby, albeit a weird one that I’m not very good at!