Phonics with Dot-Dot Markers, plus Review of Get Ready, Get Set, Go for the Code!

In an effort to raise my kids to be total morons, I long ago renamed the simple “bingo dabber” as a “dot-dot marker” and like most baby names for things, it seems to have stuck.  These ones are actual name-brand Do-a-Dot Markers, which look  more wholesome because they have the name of the colour written on them, but really (shh) – any brand, even the dollar-store ones, will do.

I use these with Gavriel Zev when (we need) / (he wants) to work on something and he doesn’t feel like writing, which is almost NEVER.  He is starting to draw, and will trace a letter that I have drawn, but really would rather not if he doesn’t have to… so I don’t push.

Because of how much Naomi and I have loved doing Explode the Code, I bought the three “pre” books – Get Ready (Book A), Get Set (Book B), and Go for the Code (Book C) – a while ago and was waiting for the right time to start… which arrived a while ago, like back in October, I just haven’t had a chance to mention it.

I was somewhat annoyed that this series takes THREE books to cover material that most programs cover in a single book.  The pages are spacious, to say the least, but extremely thorough.  This program would be great with kids who need a  little extra learning to make the connection with phonics to help them jump into reading.  As for Gavriel Zev… he doesn’t NEED it, but he enjoys it, so we’re still plodding through.  Though he’s reading well, I won’t start the first Explode the Code book until  his handwriting is a little better. 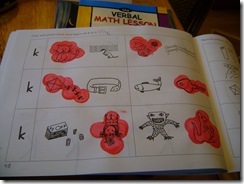 This book annoys Naomi to no end and may drive some parents crazy because it is purely PHONIC.  That means that “cat” is one of the example words for the letter “k,” as you can see at the left.  It probably helps simplify early reading if you can cement the “c says k” association early on… for Gavriel Zev, this isn’t a problem, and now that he is reading many sight words with soft c’s, I worry that I’m just teaching him bad spelling.  I try not to think about it.

Most of the exercises don’t require writing, just some simple lines and matching skills.  However, there is some writing in the program, and I know some parents have objected to this because insisting on the writing component is an arbitrary and unnecessary delay in starting reading and phonics.  Many, MANY kids who can’t write at all can read extremely well.

Another objection, and this applies to all the Explode the Code books, is that parents want to use their own handwriting program, like Handwriting Without Tears.  There is some instruction in letter formation in these Get Ready, Get Set and Go books, but I’m ignoring that and using all capital letters for the writing exercises. I generally ask GZ what letter to write, then print it with a pencil or pen, then let him trace over it.  I ignore the letter style of the book and use the Handwriting Without Tears shapes instead, showing him the starting corner at the top and the frog jump to make letters like M, F, and P.

If you REALLY don’t want to do handwriting, or your child is really not ready for handwriting, I can easily see skipping these bits.  They don’t add all that much to the program – it feels like they were just thrown in for completeness, and to segue into the first Explode the Code book, which definitely requires some handwriting fluency.

Beyond the writing pages – and I can’t believe I forgot to take a picture of one of those – there are a few different kinds of exercises.

This page was part of a review at the end of the “K” section.  I think they were supposed to match the pictures with the letters that were nearby, but he created a convoluted sort of maze instead. 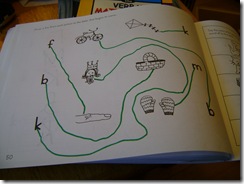 After K, the book introduces T very gently, using familiar activities like same/different, tracing a simple maze from the letter to the word, and matching turkeys and other T objects with the correct letter. 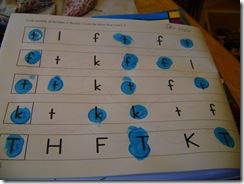 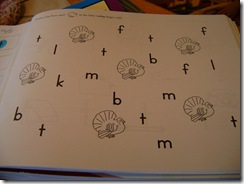 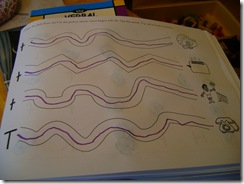 As I mentioned last week, I found a fun way to make a kinesthetic connection that both kids love.  I say a verb (I just told them “action word”) and if it starts with the current letter sound, they have to act it out – otherwise, they had to stand still; like a phonics “Simon Says.”  So, for K, if I said “dance” they had to stand still, but if I said, “kick” or “kiss” or “carry” or “cuddle” we acted it out (remember, phonetically, these are “k” words – yes, it’ll drive you crazy!).  We also did a version of this with animals – like for kangaroos and koalas and… hmm… I’m tired, and the word “cartridges” came to  mind as a kind of animal.

I keep Gavriel Zev’s lessons in this book to about 10 minutes (3 or 4 pages in the book), and then he is ever so happy to scamper off back to free play, to Naomi’s eternal jealousment.  Overall, I’d say these books are not essential.  They may even annoy many parents and kids may not quite understand the point of repeating things over and over that they already know. 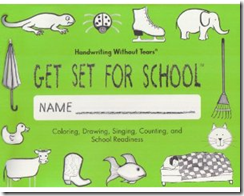 That doesn’t make it twaddle; I think these books provide excellent reinforcement, particularly for prereaders or early readers who aren’t entirely confident about the letter sounds yet.  In our case, he’s a great reader, but I’m looking at this as a fun way to help him transition into further explorations with workbooks later on in his JK and SK years.  I’m thinking of incorporating the Pre-K Handwriting Without Tears book, Get Set for School (I know, it’s a confusingly similar title to Get Set for the Code), once he finishes Book A.

This first handwriting book was not very helpful for Naomi Rivka, and went mostly unused because she was ready for the next level up.  But for Gavriel Zev, who is a reluctant writer, it will probably be worth biting the bullet and using this book to transition him off dot-dot markers and tracing-mommy’s-handwriting. 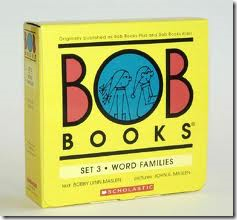 sticking with last’s theme of movin’ on up:  Gavriel Zev started the THIRD box of BOB Books tonight – Set 3:  Word Families.  He continues to love these stupid stories, as well as reading with an audience.  It’s actually kind of sad, because when other kids come over, he tries to rope them into hearing his stories… which he reads capably, but haltingly.  If it’s an entire Dr. Seuss book, which it sometimes is, it could take him a while.