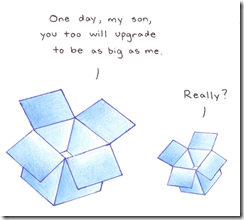 I caved.  I upgraded.  I am indeed a packrat, and I have been using DropBox to store the overage… except that the basic free account wasn’t enough and, well, after weeks of warnings that my DropBox was full – I upgraded.

I use DropBox for all my school-related stuff, but I’ve been meaning to expand and use it for writing stuff as well.  Now I can, and I’m thrilled about it.  I’m hoping that the small amounts that are trickling in for selling lapbooks and stuff  will fund this additional expansion in the name of improving the quality of homeschool printables I’m able to create and archive.  PDFs and graphics thingies take up a lot of room.

I have to say – though I don’t like most new things or most technical things (as my kids will tell you; for a techie, I have surprisingly Luddite inclinations) I enjoy DropBox very much.  It has worked pretty much seamlessly, as promised.  The free downloadable desktop application has worked completely seamlessly, more than seamlessly, both on Windows XP and on Ubuntu – even through a complete OS upgrade.

Using the desktop application makes it seamless (am I overusing that word?  I can’t help it – there is nothing better to describe how smoothly it fits into my working environment) and even EASY to get at your files from anywhere.  On Windows, the folders and files look and act exactly like Windows folders and files, except they appear with a discreet little “logo” on the icon – a green checkmark if the file is up-to-date and stored in DropBox, a blue “recycle” icon if it’s presently being synced to DropBox, and a red “X” icon if your DropBox is full and your file cannot be synced.

(you can see one little blue icon in the list below, among all the green ones)

Another thing I like is that at any time, for any reason, you can shut off the DropBox desktop application.  When it’s not running, the icons vanish and your files and folders are just that – regular files and folders on your computer.  The minute you turn the DropBox app back on, it will re-sync the files in the background, getting everything tidied up while you do other things.

The files pretty much sync instantly – as I save a document or update it, it’s whisked away into DropBox-land, where it is tucked away safely until I need it again.  The sync is fast and doesn’t seem to slow down other processes.

I will mention that briefly, BRIEFLY, on occasions when my very old computer has been very overwhelmed, it has appeared that the files from a particular folder have vanished because DropBox is in the process of syncing and updating the icons.  The files never DID actually vanish, I want to be very clear, but on these two or three occasions, I have nearly had a heart attack because it LOOKED like my files were gone.  And then they reappeared and everything was okay.  And I want to repeat one more time – the files were never actually gone; they were just having their icons updated.  I see this as more a flaw in how I use the computer than in the program.  I know that I tax it to its limit.  Here are the current contents of my Taskbar, below, and this is what I consider “light” use – I don’t have a lot going on in the background.  And this is a very old computer.

My only real concern with a service like this is that there are no guarantees that they’ll stay in business.  I am subscribed month-to-month, so I’m not worried about dishing out a year in advance and losing my money, but there’s always the chance that they’ll go belly-up while they have all your files.  However, the risk of this is minimal with DropBox, because presumably, you have at LEAST one other copy (on your computer’s hard drive) and possibly extra copies on any other computers on which you’ve installed the DropBox app.

I have been looking for a good way to handle backups for YEARS and this thing is cheaper, more carefree, more portable and more OS-independent than any physical backup media I have ever seen.  You can sign up in minutes and sync the desktop app in the background while you work.  All your backup worries could be solved by the time you finish reading this post!

Anyway… here’s why I’m writing about this, besides the fact that I love sharing the news when I find a Very Good Thing of any kind.  If you click any of the DropBox links in this post, or either of the images, you will be referred to the signup page with my special UserID, so I will get a small kickback of extra file space for referring you.

Why do I need extra file space if I’ve already upgraded?

Because with MORE file space, even just as much as I’d get from 1-2 DropBox referrals (remember, even if you sign up, you never have to use the thing if it doesn’t work out for you, and I STILL get the bonus!), I would be able to back up the 56Gb of family photos that are still trapped on our hard drive.  We’ve TRIED backing them up to CD’s and DVD’s, but the quantity of disks it would take at this point is staggering, or at the very least, stupefying.  And I really think it’s a backwards move to invest in any kind of external hard drive.

So I’m hoping – and you can add this to my Black Friday Blogger Wish List if you’d like – you’ll give DropBox a try and love it, and then our family’s photos can be secure (on DropBox) at last!

In case you haven’t gotten the hint, click here to try DropBox… and tell them I sent you!