Update:  I made up a game to go along with this dodecahedron!  More details here. 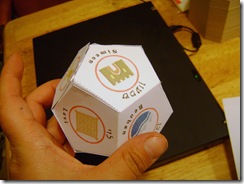 A bit late for Vayeitzei, but since we’ll keep reading about the adventures of the twelve shevatim over the next few weeks, I figured something like this could come in handy for dice games, just tossing around… or whatever.

I was inspired by this “twelve days of Xmas” dodecahedron project for sale at CurrClick. As soon as I saw it, I wondered, “what do WE learn about that comes in 12s???”  Since we’ve just finished learning Parshas Vayeitzei, which includes the birth of 11 out of the 12 shevatim (tribes), it didn’t take long to figure out.  (the fact that it took any time at all is kind of puzzling!)

Hebrew grammar note:  the word for “tribe” in the singular = שֵׁבֶט = shevet; in the plural = שְׁבָטִים = shevatim.  HOWEVER, it is often seen as שִׁבְטֵי = shivtei when it modifies another noun, most commonly in the phrase שִׁבְטֵי יִשְׂרָאֵל – the tribes of Israel.  Nobody ever taught me that it was the same word, with and without the ם / mem on the end, so I hope I am saving somebody some degree of angst over this “advanced” form of the word. 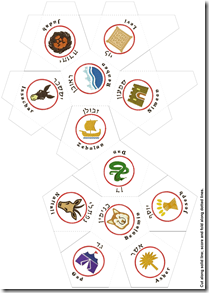 Anyway – back to our dodecahedron:

The paper pattern looks complicated, but don’t be scared!  That said, I definitely recommend a “fast acting” white glue, like Aleene’s Fast Grab, for this and any other craft you don’t want to stand around pinching dry for hours on end.

I found it was easiest to do all the cutting first, then do all the folding (dashed lines), then glue the first 6 tribes together, then glue each of the next tribes onto the “bottom” one at a time.  Save Yosef (Joseph) for last – he has no tabs, but just gets glued securely onto the other shevatim alongside. 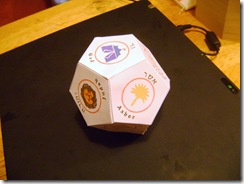 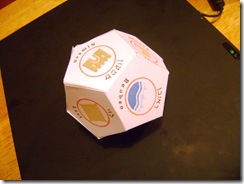 This project was based on the regular “calendar dodecahedron” shape found on this page – great resource for generating a custom-printable year-long calendar!

p.s. While you assemble it, or toss it around, you can sing our “shevatim song” (to the tune formerly known as “10 little Indians”):

For the record, my children have heard this song in a million contexts – we use the same tune for the 12 months of the Jewish year – but have never, ever, EVER heard it about any kind of racial group, from India other otherwise.