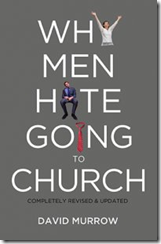 I recently received a free review copy of David Murrow’s Why Men Hate Going to Church from BookSneeze.com, and I want to say right away – this book is an example of why I love doing book reviews:  it is immensely readable, insightful, entertaining and thought-provoking.

I’ve been interested in this issue since I read something about men’s declining interest in Judaism in Moment magazine a while ago, and I actually wrote an article (click here, scroll down to page 10-11) recently about the subject as well.  I interviewed clergy and other people from various synagogues here, who basically said (pick one):  “this isn’t a problem in our shul,” or “I haven’t observed this at all,” or, the shiftiest answer, “if it IS a problem, it’s not a problem of any one particular movement.”

Which is nonsense, as far as I’m concerned.  Of COURSE it’s a problem, and it’s a problem where women are on the bimah, women are reading the Torah, women are concocting images of God that are less all-powerful and more all-caring.  Which is not to say the God I believe in isn’t caring, but from everything I’ve read, whenever Judaism drops the fierce, strong, warrior-like imagery of Hashem (perhaps subtly pressured to do so by Christians’ belief that we worship an “angry Old Testament God”???), and drops the man-focused language of the traditional liturgy in favour of affirmations and pop psychology, men’s eyes glaze over and, if they go to shul at all, it’s because their wives make them go.

I know this is happening in Judaism, and the sad thing is, being Jews, nobody seems to care, because everybody just feels that Judaism is getting bigger and better, more and more inclusive, without realizing we’re leaving almost 50% of our nation in the dust.

Please – if you are a man who goes, on his own, to a liberal shul and you love it, let me know.  I publish all non-spam comments, even the ones I don’t necessarily agree with, and I’m sure there are thousands of exceptions to my sweeping, offensive generalization.

For almost two decades now, I’ve watched the same thing happening within Christianity as it opens up, becomes less condemning and more liberal, more accepting, more like the ideal held up by most liberal Jews.

Which is where Murrow comes in – he’s on a crusade to win men back to Christianity.  He believes the feminization of Christian imagery has emasculated it and that many types of church services not only have little of interest to offer men, they drive men away with physically scary rituals like group hugs and emotionally scary imagery like ministers who urge their followers to develop an “intimate” relationship with Jesus, occasionally even visualizing “kissing” him.  To which, as a straight man, he says, basically, “ew.” (only he says it better, and more articulately)

This directness may offend some readers.  So will a couple of surprisingly bawdy references – as he discusses Christian heaven as “an eternity singing in the choir,” he contrasts this with “Mormon heaven, where faithful men spend the afterlife making celestial babies.  Or consider Muslim heaven, where martyrs enjoy the everlasting ministrations of seventy-two virgins.  Guys, which sounds better to you:  eternal singing or eternal sex?  Is it any wonder why Mormonism and Islam are growing so rapidly and are so popular with males?”

Discussing group prayer, he mentions “prayer mushrooms,” where one person, seated, asks for prayers and the other men are supposed to come and place their hands on his head – creating a “mushroom” around the prayee.  “Why do guys fear the mushroom?… A man’s instinct is to flee… having strange hands all over his body is worse than having a squirrel loose in his jockeys.”

Light, joking tone aside, Murrow’s book skillfully takes the intellectual and spiritual high ground, pointing out problems in a new and refreshing way but actually presenting solutions.  The 2011 edition of the book has been updated with a preface as well as case studies of churches that are working to draw in men, and every chapter includes a “link” to Murrow’s website, ChurchforMen.com, where there’s lots more information for pastors and laypeople.

The book’s honesty can be refreshing.  I thought I was the only one who’d noticed the stereotype of black women as fervent churchgoers, while black men seem to be embracing Islam instead.  Murrow points out the practical reality that as black men drift away from Christianity, “the African-American community faces the prospect of separate religions for each gender.”  He also mentions the fact that as men stop going to church, tithes shrink; as he says, it’s coming out of the “grocery money” instead of the family’s paycheque.

Most of the solutions in here are church-oriented, but I think there’s a lot of take-away value here for people of any religion.  While prayer circles and praise singing don’t happen in synagogues around here, often leaders seem like they either don’t know or don’t care what’s driving men away – or that there are simple solutions.  Surprisingly, he doesn’t even shy away from the issue of female clergy:  in fact, he gives an example of a female minister who is among the hardest-working at bringing men back to her congregation.

In this Jew’s opinion, Why Men Hate Going to Church is an important book for anyone interested in the future of mainstream religion – any religion – in Western society.  If we hope to raise our kids, girls AND boys, believing and practicing more or less what we believe and practice, our religious institutions must embrace and court believers of both genders.

Much as we feel like men have the upper hand, it seems this is usually no longer the case.