Meeting the Masters: Picasso(s) at work

To go along with our current artist, Pablo Picasso, I printed these two sheets from Making Art Fun:  “Self-Portrait 1907” and “Three Musicians.”  Naomi Rivka astutely noticed that this “Three Musicians” was not the same as the one we’ve been looking at, in the Meet the Masters presentation and in the Raboff Picasso book.

Here’s the one that we’ve been looking at: 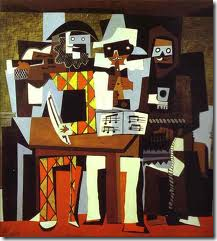 And here’s the OTHER one I knew nothing about until I printed this PDF and Naomi told me it was different: 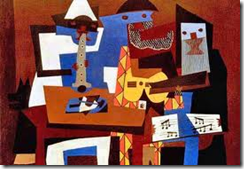 They’re both CALLED “Three Musicians”… weird.  We are all learning so much about art…

Naomi Rivka chose to do the Self-Portrait and so I did the Musicians.  It may LOOK like she just threw paint at hers randomly, but it took her a seriously long time, much of which was spent with her palette, perfecting the colours before she put them on the paper.  And the runny streaks of colour are deliberate – go figure.  Mine just turned out WEIRD.  It is very hard to capture all the nuances of brown, blue and black with just a glance (our neighbour was here using the computer so I couldn’t peek while I did it).  Just to be ornery, I coloured the clarinet purple.  As I’ve said before, I don’t want to be the kind of mama who hands art projects off to her kids without actually sitting down to try them myself. 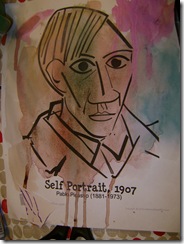 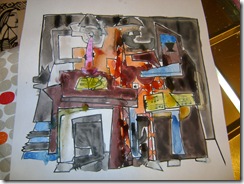 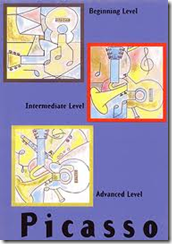 There IS an official “cubist art” project that comes with Meet the Masters.  It looks very easy, and I believe it involves oil pastels, which Naomi loves.  Basically, you colour in a picture of a guitar and rearrange the segments so it looks all “scrambled.”  I don’t know exactly how true this is to Picasso’s style.

He didn’t scramble the pictures randomly; he deliberately and painstakingly juxtaposed several views of an object to create a cubist perspective.  This project doesn’t reveal more of the guitar by scrambling the segments, so the logician in me is howling with the inconsistency of it.  However, as in the Musicians picture above, it is certainly true that the final artwork often ENDS UP looking scrambled.  And I’m sure both kids will enjoy colouring the picture, then chopping it up.  Or chopping it up, then colouring it, as this homeschool family did.

This one isn’t Picasso-based:  I played around with creating the “Chagall-style” stained-glass windows project I discovered the other night.  The original example calls for a great big laminating pouch, but those things are something like $15 for 5… so I’m trying it with clear contact paper to see what happens.  However, I suspect the ironing step is important, both in creating the seal and in getting the coloured tissue paper to lie nice and flat.  We will see how it turns out.  (not too promising so far, but maybe it will look stunning with the light coming through it!) 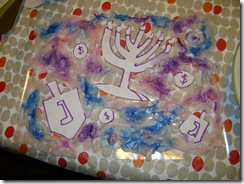 Finally, after she was finished her Picasso painting, Naomi Rivka started work on a “painting-sketch” of Elisheva.  I think we were both astonished with how well this turned out.  She started colouring the background with paint and then announced, “this would be perfect for oil pastels!”  And it was. 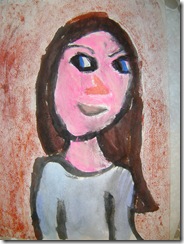 I’m just impressed that she coloured in the entire paper.  To me, that is still the mark of a true artist – no white stuff around the edges of the art.