A Different Parsha Poem: by Naomi and Me!

Generally, a day without school, unless you count a gym class as school.  (luckily, I do!) 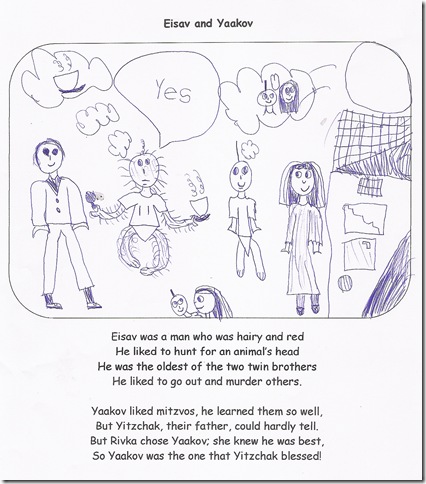 Lowlight of the day was, we went for frozen yogurt (don’t ask – it was a freezing day on which we did NOT need frozen yogurt, but let’s just say the story involved a friend with cancer so I said yes) and the weird cholov Yisrael froyo guy asked, “are you ladies all on recess?”  And we kind of tittered, and then he said, “well, SHE has to go back to school afterwards, right?” pointing to Naomi.  And I said no.  And he said, “but isn’t she in school?”  No.  She isn’t.  I think the lively weird conversation fizzled out after that.

But while we were travelling around in the car, I mentioned how easy it is to write a poem.  You just think of a word about something and then pick a word that rhymes.  We were saying words back and forth and it was fun.  So later on, after supper, Naomi mentioned I’d promised we could write a parsha poem together… which I had sort of hinted was POSSIBLE, though I hadn’t said we’d actually did it.

So we wrote one.

It was fun!  She was a little concerned:  “this isn’t the LONGEST parsha poem…”  I said that was okay, and then drew a big rectangle on top of the poem for her to add a picture… she skipped away happy and basically spent the rest of the evening drawing the picture to go with the poem.

It’s not Shakespeare, but I’m pretty happy with what we came up with:

Eisav was a man who was hairy and red
He liked to hunt for an animal’s head
He was the oldest of the two twin brothers
He liked to go out and murder others.

Yaakov liked mitzvos, he learned them so well,
But Yitzchak, their father, could hardly tell.
But Rivka chose Yaakov; she knew he was best,
So Yaakov was the one that Yitzchak blessed!