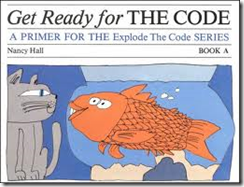 While Naomi Rivka was out at ballet class yesterday, Gavriel Zev enjoyed some happy one-on-one time with mama.  He’s been working well in his phonics book, Get Ready for the Code, lately, but yesterday I decided to skip it so we could work in our Math Rods ABC Book, the Cuisenaire Rods Alphabet Book 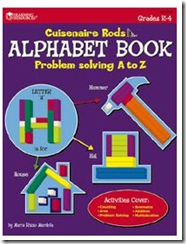 The book hasn’t been as wonderful as I’d hoped; really, you could create your own rod drawings for a kid to fill in pretty easily.  But he still enjoys using it from time to time, and it has some basic instruction-following steps for filling in the letters (“now fill in the letter with only RED rods; count how many you used”) that he’ll do if I push him gently into it.

I made a crocodile for him, while he worked on the one in the book: 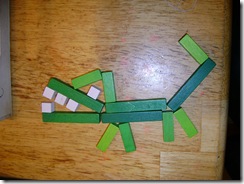 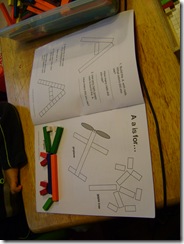 Honestly, he really doesn’t like most of the pictures in the book.  But the alligator captures his imagination every time.  I think we’ve done the A page more times than any of the others put together.  He also did the airplane. 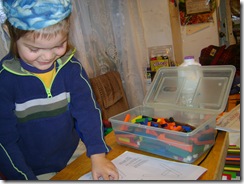 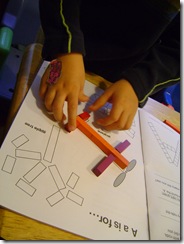 You can just see in the picture here – before we started, just as I always did with Naomi Rivka, I had him build the “rod staircase,” a pyramid shape of rods in ascending, then descending order.  He built it amazingly quickly and seems to be developing an amazing intuition for which rods will fit where.  But he had little patience for even gentle “testing” - “show me a rod bigger than yellow and smaller than brown” and started showing me rods at random just so he could go back to what he was doing.  When I pushed him a little, though, he did show me the proper rod both times.  I didn’t go any further – really, we were just doing it for fun. 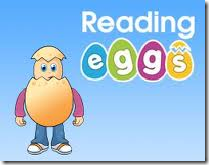 Afterwards, we read a couple of stories, and then I let him play with Reading Eggs – which was a mistake because it’s an expensive site and our free trial runs out this week.  I joined a while back, but didn’t get around to letting the kids use it.  He loved it, though, and for the first time, I let him use the mouse on his own.  He was unsure at first, but picked it up REALLY quickly.

He was raving about the singing, muffin-eating ant, so naturally, Naomi Rivka had to try it.  We let her do it for a while tonight and she loved it as well.  At least her free trial still has another 5 weeks, because I had a fresh coupon code.

HomeschoolBuyersCo-op has this on for 25% off right now, bringing it “down” to $56 per kid per year.  Blah.  A couple of months ago, they had a deal where you could buy it with SmartPoints (referral points, of which I have over 3000 sitting doing nothing).  I was going back and forth and eventually went to bed, thinking I could sign up in the morning.  When I went to sign up, the deal was GONE!  So now, instead of nothing, it’s more than $100 if I want it for both kids… :-(

Hmm:  I could probably just get one membership for Naomi Rivka and let Gavriel Zev do the lower levels whenever he felt like it… well, that’s probably not allowed, so let’s just pretend I didn’t say anything.  :-)