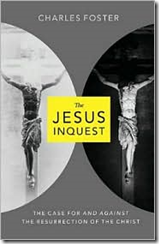 I recently received a free review copy of The Jesus Inquest: The case for - and against - the resurrection of the Christ from Booksneeze.  The site had mostly Christian books to choose from: I chose this one because I’ve done a lot of reading in Christian apologetics, but not for a while, so I figured this book would help me exercise those rusty intellectual muscles.  Indeed, it has.

The Jesus Inquest is written in a very comprehensive and scholarly way.  There is no questioning the author’s credentials:  he’s a British barrister (lawyer) who easily slices his way through popular trends in contemporary Christianity, separating the fluff (all that Da Vinci nonsense) from the hard-core, enduring issues.

The format of the book is somewhat unique and intriguing.  Foster presents the bulk of the text as a “debate” in writing between two parties:  X, a non-believer, and Y, a knowledgeable Christian (presumably Foster himself).  There’s a helpful “agreed statement” section first that details the common ground between these two:  the things they both agree initially are undeniably true (such as the chronology of the gospel writers:  Mark, then Matthew/Luke, then John.  The book then goes on, point by point, to debate the Christian credo:  that Jesus was crucified, suffered and died on the cross, was buried, rose from the dead, etc.

The part of the skeptic is extremely well-written indeed… as a Jewish reader, I find myself nodding my head along with the arguments presented AGAINST the Christian case.  Most of the arguments are legitimate, though there are a few “straw men” raised.  For instance, every scholar agrees that the gospels are alarmingly disjointed:  this is not considered to be a major case against Christianity, yet disagreement among the gospels comes up in X’s argument a few times.  Similarly, I’ve read books that suggest that Jesus survived his crucifixion, but, while entertaining, these are not really considered legitimate scholarship – even Jewish sources seem to acknowlege that he was crucified and died (and finish, basically, with “so what?”).  Even Y acknowledges as much – so I’m disappointed that these arguments are included by X, at some length, too.

Nevertheless, the book’s historical detail and insight into first-century Judaism under Roman rule is fascinating, and Foster seems to have consulted with legitimate sources – both Christian and Jewish – to support many  of his arguments about the historical time period in which the Jesus story took place.

Ultimately, Foster (and Y) believes he has strongly made the case that the events recorded in the gospels are not mere faith statements, but legitimate historical fact.  As a Jewish reader, I’m not in a position to say the same.  He hasn’t convinced me, but I knew going in that he wouldn’t – I wanted to come along for the read because it is fascinating, intellectually and even spiritually, to understand what those around me believe.  What this book offers a Christian reader is what Rabbi Lawrence Kelemen has called PERMISSION to believe (in the title of his book “Permission to Believe”) – not stunning proofs, necessarily, but the affirmation that you’re not crazy if you want to believe Christianity.

Sadly, this book ultimately wasn’t a fascinating read – not even the most fascinating apologetic read.  By endeavouring to be a more moderate, intellectual alternative to the standard works by Christian authors like Lee Strobel (who’s mentioned by name a couple of times), Foster seems to have shot himself in the foot – making his work also less accessible, and less entertaining.  You can debate whether a work of apologetics OUGHT to be entertaining (perhaps not), but the truth is, with its elaborate footnotes and appendices, this is a very dry book.

Nevertheless, for a Christian looking to history for evidence of what he or she already believes, or wishes to believe, The Jesus Inquest is intellectually a cut above most mainstream apologetic work.  In my case, it has been helpful in understanding the Christian position, and I did greatly appreciate Foster’s sensitivity to the Jewishness of the time and place in which Jesus lived.

Disclosure of Material Connection: I received this book free from the publisher through the BookSneeze®.com <http://BookSneeze®.com> book review bloggers program. I was not required to write a positive review. The opinions I have expressed are my own. I am disclosing this in accordance with the Federal Trade Commission’s 16 CFR, Part 255 <http://www.access.gpo.gov/nara/cfr/waisidx_03/16cfr255_03.html> : “Guides Concerning the Use of Endorsements and Testimonials in Advertising.”