Postscript, which I am inserting before the text, making this a PREscript, except that word is already sort of taken:  I knew this would happen!  Turns out I blogged about a free handwriting font generator way back in 2009.  But as predicted, that site is now defunct.  So try this one, while it lasts. 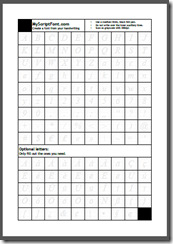 I’ve been looking for a decent Hebrew block print “handwriting” font for a LONG time to help in creating copywork for the parsha, yamim tovim, etc.  Mostly, I’ve been trying to figure out how to create my own, and finally, I think I figured out how to do it.

I had lots of fun playing around on this site last night creating a Hebrew font, though you could use it for any type of custom font, including other languages or creating your own scalable dingbats… or whatever you want.  Sites like this come and go (I used another one last time), but as of now it’s still up and running.

However, instead of printing the PDF and scanning it in again, which produced iffy results the last time I tried to create a font (maybe because my OWN Hebrew handwriting is terrible! – see results at right), I had a stroke of brilliance:  convert the PDF to a JPG and modify it right on the computer in PaintShop Pro 5, my old but trusty image-editing program.

(I downloaded version 5 FREE in beta circa 1998, and it runs beautifully without needing installation, so I have just copied it from computer to computer as we’ve upgraded.  These days, they charge however-much for the latest and greatest version)

Anyway, it worked beautifully, letting me draw lines that were perfectly straight and somewhat aligned with the top and bottom lines within each “cell.”  It also let me copy and paste letters, so that the kaf and chaf would be exactly identical except for the missing dot.  Here are my finished letters!

I put the 22 basic letters of the Hebrew alphabet in English ABC order; the drawback of this is that you can’t type with this font using the Hebrew keyboard layout; you have to remember which English letter corresponds to which Hebrew character.

I saved my character set as a PNG file and then uploaded it to MyScriptFont.com, which VERY quickly gave me a link to download the finished TTF file.  (If you create a font more than once just a few minutes apart, be warned:  there’s a bug that gives you the OLD version of your TTF file when you download, so you have to actually close the browser window and open a new one so it doesn’t use the cached TTF file.)

The letters in the font are not QUITE as perfect as they look in the original image file.  For whatever reason, the converter rounds them off so they are more tapered than square, mostly at the bottom.  But they are completely scaleable, like any TTF font, and look quite nice and smooth (no blockiness like when you blow up an image) even in sizes larger than the original.  So I guess the rounding-off and unevenness is the trade-off here.

And here’s a “handwritten” passuk from the Rosh Hashanah copywork sheets:

(“In the seventh month, on the first of the month, it should be for you a solemn rest.”)

Somewhat messy, but a darn sight better than my REAL Hebrew handwriting!

So that’s that… tons of fun, and I don’t get a kickback, but I wanted to share this anyway.  Now go create your own font (or have your KIDS create theirs!) while the site is up.  Like I said, I’ve seen a few sites that offer this service in my time… but they’re usually gone pretty quickly.  (maybe something to do with that lonely “Donate” button at the top of the screen???)