Turns out we’re doing  “school lite” because our days are so eaten-up by everything else we’re up to.  But that’s fine with me!

We started with math, and I actually hauled out the rods again, because (in my opinion) the JUMP Math book didn’t go into enough detail on pairs that make five and pairs that make ten.  I want her to know these in her sleep, and we’re getting there. 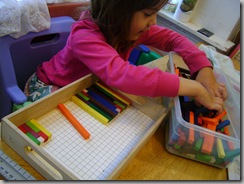 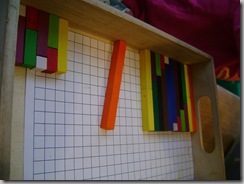 Whenever we have to use the rods, I am grateful – every single time – for the free play she did with rods over several months at the beginning of last year.  Making staircases, making trains… it looks like nothing, it looks like playing around, but she KNOWS the rods like nothing else.

If I say a number, she grabs the right rod without thinking.  And she knows instinctively which ones go together to make tens and fives.  Yay for automaticity!  Once we’d worked in this for a bit, we went on to the worksheet, and she did great. 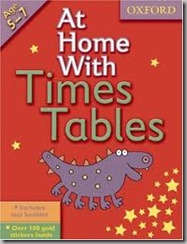 She’s been doing great with skip counting, so for a break, I thought I’d try this book, At Home with Times Tables, which I picked up at Batner last week.   It’s a little weird and Britishy, but it’s also the most non-threatening introduction of multiplication I have ever seen.

With this book completed, she’ll be ready to move on to many of the Miquon sheets I’ve set aside.  Miquon covers multiplication in Grade One, while JUMP doesn’t do it until Grade Two.  I’m definitely in favour of introducing it early so it doesn’t start to seem “too hard.”

If you call it skip counting, it’s really just the easiest thing in the world.

Speaking of skipping – skip the following paragraph if you subscribe to a philosophy of education that says tired, crying children should not be made to continue with lessons:  (eek)

Lest you think I’m one of these supermamas who can do everything and ferry her kids to swim lessons and home and keep right on schooling them… well, no.  After Handwriting Without Tears, by the end of her spelling lesson, where Naomi Rivka had to make up a short “bus rule” using two list words (which included “bus” and “sit”), she melted into a puddle of noisy tears.

Luckily, FLL and lunch defused her a little bit.  She didn’t want to do FLL, and cried through her first recitation of “The Caterpillar” (it was a review lesson), but then she remembered that she knows it well and it feels good to recite something you know well.

We then “foreshadowed” our afternoon history lesson by watching a cute Reading Rainbow DVD from the library featuring the book Mummies Made in Egypt, by Aliki.  We’d read the book already a couple of times – Naomi Rivka is fascinated by mummies right now and watched the video open-mouthed (okay, partly because she was eating lunch – I finally convinced her to eat Eden Rice n’ Beans!!!) .

I’m secretly grateful the big kids are away (I’m embedding this paragraph in the middle of a long rambly post for a reason) because if they were here, one of them in particular would very likely scream and have fits and try to shut down her interest, or at least stop her from talking about it at every possible moment.

Being a younger kid in a family means getting shut down - a lot, I’m discovering.  I’m glad she’s had this three weeks to blossom.  Hey, maybe that’s why she seems older now!  Whoops, I mentioned that at the END of this post, and then came back to insert this bit, so it doesn’t make any sense to explain it here.  Sigh – it’s late and I’m not fixing it. 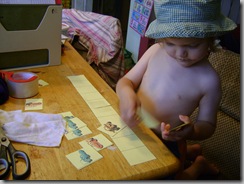 I really don’t like pandering to these commercial / Disney things, but Gavriel Zev is so passionate about Cars that I lazily printed a few activities from the Cars Preschool Pack over at 1plus1plus1equals1.com.

This pattern activity sank like a lead balloon.  He has no clue what a pattern is, and just wanted to place the cars in any 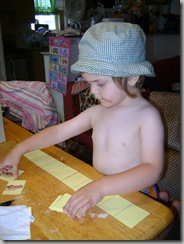 order, then run them around and have adventures with them.  Fair enough, little guy.  He did a few of the activities on Monday and enjoyed them – well worth checking out anyway.  Maybe tomorrow, I’ll let him glue these cars onto a piece of paper, which is all he likes to do anyway.

Speaking of gluing, he finally DID get to glue stuff when we got around, after naptime, to doing history (yep, six hours later and he’s STILL naked from the waist up!).  I read SOTW and Naomi did the narration and then – the house was quiet and I didn’t have to cook because we were out for supper – 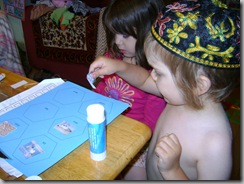 I pulled out the lapbook components I’d been saving.

This is an amazing lapbook from homeschool mama Alia Macrina Heise over at The Chronicle of the Earth – and it’s entirely FREE!  There’s one small but tasteful component for each of 43 chapters; there’s an amazing variety of mini-book styles in this lapbook.  If you’re doing Story of the World, you must check it out. 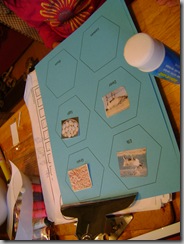 We hadn’t done any of the mini-books so far, so we started with Chapter 1, Nomads.  Naomi cut; GZ glued the foods nomads ate onto the pages.  You’re supposed to stack up these little hexagonal pages, but there are eighteen of them, which I thought would make for a terribly thick book, so I doubled them up to make a weird elongated shape.

We also did Chapters 2 and 3, but I didn’t take pictures. 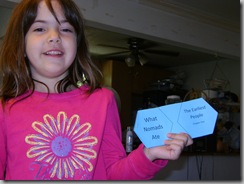 All of a sudden, Naomi Rivka looks older this week.  When did this happen???