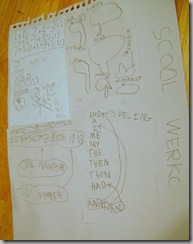 Now that Naomi’s learning that some words are more complicated than others, with hidden letters and non-phonetic syllables, her spelling hasn’t necessarily improved, but it’s definitely gotten more complicated.

Yesterday, in the middle of four long, involved interviews and making Shabbos, I messed up my back pretty badly and all I could do was sit at the computer playing Solitaire (in a previous era, I would have taken to my bed, but honestly, the computer chair was the most comfy thing!).

We’ve been so very busy that the prospect of a day off was a treat for the kids and they promptly and wonderfully went off and did their own thing.  They played outside for a while, then built train tracks in the basement together.  Then Naomi came up and asked for paper to do a “collage.”

This sheet of “scool werkc” is what she came up with, and it took her a good long time, giving me tons of peace and quiet.

Click the picture to see more detail.  It includes (clockwise from top left) Math (including addition, geometry, and a baby on a see-saw with the mother saying “Who is that?  I do not know!”), Geography (continents drawn from memory in no particular order), Speling  (a little word list, with three words used to construct the sentence “and I had”), and more Math (symbols for “equals and plus and subtract”, along with sets of “oan number” (single digit) and “tou number” (double digit)).

I did give them lunch (baked freezer bourekas, like every Friday) and was just gearing up to do parsha and bathtime when Ted called that he’d gotten off work an HOUR early.  Unprecedented!  Not only that but, because he’d been asked to take a rabbi home after a service, he was right around the corner.

He was here in less than five minutes, dashing in to my rescue, and allowing me to not only learn parsha with the kids, but further deepen my Windows Solitaire skills.

No school this week, because Naomi Rivka’s away at Riverdale Farm Camp all day.  No school, but yes shlep – we have to be downtown at 9:30 every morning.

If the weather’s nice, we’ll puddle in the wading pool and hit the farmers’ market after camp on Tuesday.  Gavriel Zev has also started a Kinder-Gym program on Tuesday mornings, giving me precisely 45 precious minutes of time off this week!