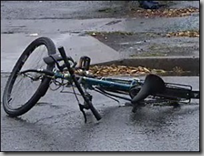 I have never fully understood how insurance works here in Ontario.  We have a thing called “no-fault” insurance which seems to mean that YOU pay regardless of whose fault it was.  It’s supposed to be a marvellous system, yay, but I cannot for the life of me understand why.

So here’s how it works, in practical reality.

I saw something saying you had to file a claim within 7 days, so I called the driver’s insurance today to report the accident and potential claim (casts, crutches, bicycle repairs… any other unreimbursed expenses; I’m not asking for a fortune here, and it’ll probably be under $300, all-told).

They said they were sorry I was hurt – and to call my OWN insurance company.  That’s right, MY insurance.  The nice folks who have gone on record that every inquiry phone call is automatically considered a “claim” and raises our rates, even if they pay out nothing.

Not to mention, our insurance has a $1000 deductible.  So there you go.  Dead end:  no WAY am I calling them about a $300 bicycle and casts claim if it’s going to raise my mother’s premiums come renewal time.

(What do cyclists do if they don’t HAVE car insurance, like my sister???  You don’t want to know:  the process is even more intricate and stupid for them.)

So the next step is bais din, because he’s supposedly a frum guy.  (The kind who lies to the police, or at least runs to cover his tuchus after he nearly kills an innocent homeschooling cloth-diapering bicycling mother of four.) (me!)

Actually, the next step is to call him and ask him nicely for the money.  I have been advised by bais din that I’m allowed to do so, and it seems the civilized thing to do.

Considering he went straight to the cops yesterday to tell them it wasn’t his fault, however, I’m not optimistic about his eagerness to settle.  Particularly since the police officer taking the report yesterday informed him that legally (regardless of who’s at fault), he has no obligation to pay me anything outside the insurance and/or civil court systems.

I think they tell people that so they won’t feel pressured to pay under the table – though that’s the way I handled my last collision (I was at fault), paying the other guy’s repair shop directly so it wouldn’t go on my insurance.

Which leaves bais din – the avenue you’re supposed to pursue first instead of taking another Jew to court.

A process I dread, but perhaps less costly than Small Claims Court, although I’m sure there are charges of various kinds to convene the assorted dayanim.  I have been to bais din for conversions, for my get… never for a “civil” proceeding.

On the other hand, maybe he’ll just fork over the less-than-$300 and walk away knowing he got off lucky.  Me, too.

As GamZu commented on my initial post, “A biker here in Brooklyn had the same thing happen to her... someone opened a car door, but her story ended tragically. There was a bus right behind her and she flew right under its wheels.”

Meanwhile, if anyone can explain “no-fault insurance” as benefiting anyone other than insurance companies, you just go right on ahead…