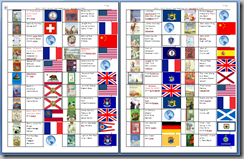 No, I haven’t dropped off the face of the earth!  We’re out much more than usual this week because Naomi’s spending the week at day camp and I’m running around entertaining Gavriel Zev and doing my own thing.

Here’s my project for this evening:  we’re having so much fun with our summer reading list, stickers and all, that I decided to do a year-long reading list – oy, vey!  - that will take us from September to June.

I’ve incorporated reading lists from Five in a Row, Volume 2 and Sonlight Read-Alouds A.  (I found this post very helpful for explaining the differences in approach between the two book lists, and like its author, concluded that I’d love my kids to get the benefits of both lists – even though we’re not doing the complete program.)

This is really a VERY diverse batch of books.  Some are quite short – others, like James Herriot's Treasury for Children, may take the bulk of the year.  A few are out of print, but I’ve checked the library, and there shouldn’t be huge problems with any of them.  Which is good, because there were about four on our summer list that I had to buy… not the end of the world, but I don’t love buying books just to read a couple of times, and some are not worth owning (in my opinion).

Making up the stickers for this reading list, I’m trying to use state flags rather than just a U.S. flag – it gets boring seeing that almost every book is from the U.S.A.!  The only thing I don’t love is that there are absolutely ZERO Canadian books on either of these lists.  FIAR1 includes The Very Last First Time, which doesn’t exactly reflect the lives of most Canadians, but I suppose captures the spirit of one region.  Still – after that, nothing.

If anyone has a booklist for excellent Canadian-content readers at this level, I’d love to hear about it for planning ahead!