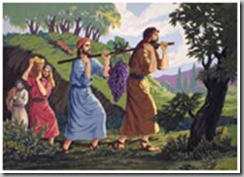 So we’re out of Mitzrayim, we’ve gotten the Torah, built the Mishkan… what’s next?

Imagine someone you loved, someone you trusted, said they were giving you an amazing present.  What would you do?  Would you…thank the person nicely and rush to get your gift?  Or refuse to take it unless you could peek in the box first?

Hopefully, you would do the first thing!  The second thing is very, very rude!

Hashem has been so very, very kind to bnei Yisrael:

He took us out of Mitzrayim.  Showed us amazing miracles the Yam Suf.  Fed us in the midbar.

He gave us the Torah and told us how to build a Mishkan where we could be close with Him.

But bnei Yisrael were still worried about what life would be like in eretz Canaan.

So they told Hashem they wanted to “peek inside” first.

Each shevet picked a leader who would walk into eretz Canaan and take a look around.

Moshe told them to go up and look around and see what the land was like, who lived there, what grew there.

Those men were called “Meraglim” – from the word Regel that means foot!

Picture the biggest cities, people and fruit you can imagine.  That’s what the meraglim found!  Everything was gigantic.  The meraglim came running back with a HUGE bunch of grapes:  “It is a rich and fertile land… with GIANTS in it!”

“We can’t possibly live there,” shouted ten of the meraglim.  “The land will eat us up!”

The meraglim were lying, but in a very smart way.

Today, Israel’s leaders are ordinary people – if we think they’re doing something wrong, we can say so.

But Hashem promised the Land to us forever.  We can’t say anything that sounds like it’s not a wonderful gift.

Bnei Yisrael heard about eretz Canaan and started to weep.

But only ten of the meraglim had said those terrible things!  Two meraglim tried to tell the whole truth.

Yehoshua ben Nun and Kalev ben Yefuneh shouted out, “If Hashem is giving it to us, then we’ll be fine!”

Some people say that terrible, terrible day was actually Tisha b’Av, a date that today brings great sadness each year.

Why didn’t the meraglim trust Hashem after everything He had done?

Sometimes, people adopt a pet from a shelter, a place that takes in animals from bad situations.  The dogs or cats in the shelter may have been abandoned, or had owners who hurt or kicked them.  It is wonderful to give an animal another chance to live in a happy home, but sometimes, the animals have been hurt so much they aren’t friendly anymore.  Maybe they’ve had to defend themselves so much they’ve become vicious and nasty, or perhaps they’re just too frightened to enjoy living with a family.  Bnei Yisrael were slaves for 200 years.  They were hurt by the Mitzriyim.  So it’s probably not their fault that they weren’t ready to go into eretz Canaan; they were probably too hurt by slavery to fully trust Hashem and see the good in His plan for bnei Yisrael.  Still, Hashem knew they wouldn’t be strong enough to go in and settle the Land for Him.  So the men of that generation had to die in the midbar; their children could enter the Land.

Some of the men – called the Ma’afilim – realized right away that they’d made a mistake!

They told Moshe they would go right away to eretz Canaan, and that Hashem would help them conquer it.

But Moshe knew that going against Hashem, nothing good would happen.  The Ma’afilim went, and they were all killed.

Hashem comforted Moshe with some rules about life in eretz Yisrael.

Hashem said when we make bread to separate a piece of dough.  The piece is called “challah;” we still do this today!

He also said to make tzitzis with blue threads in the corner.  We don’t use blue today because we don’t have the right kind of dye.  The Torah is full of rules, but Hashem forgives someone who makes a mistake.  We all make mistakes!

But if we do something wrong on purpose, and don’t do teshuvah, Hashem can’t forgive us.

Near the end of this parsha, there’s a man – the Mekoshesh Eitzim – who goes out gathering wood on Shabbos.

He is warned not to do it.  He should have known better – he was even at Matan Torah and heard it from Hashem!

Still, he kept right on doing it.  Hashem told Moshe that bnei Yisrael must all put the man to death.

Even though Hashem loves every person, aveiras damage our neshama and pull us farther away from Him.

Even one person doing aveiras can pull the rest of bnei Yisrael away from Hashem, too.

But even after seeing the Mekoshesh Eitzim put to death, bnei Yisrael did not stop fighting against Hashem!