The Preschool World of Gavriel Zev 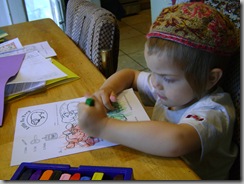 “I can colour the sheep GREEN!  I’m making ALL the sheep green!!”

This was a bit of a breakthrough because he has pretty much refused to colour for the sake of colouring up until now.  I haven’t pushed, because I don’t love colouring (do you??), but I would definitely like to see him feeeling safer with crayons or markers and taking on more creativity projects. 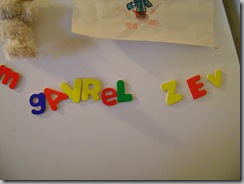 But look!  He can write his name with fridge magnets!  YM ran to take a picture, after spending a few seconds correcting his spelling of the word “comb.”  GZ left off the silent “b,” apparently.  He left the I out of his name, even though it’s his favourite (easiest) letter to write.

I have started doing a kind of “letter semaphore” that he loves:  when I tell him what letter to write, I show it with my arms held up high to form the “sticks” of the letter.  I move my arms jerkily on purpose, like a robot.

Up into a triangle for an A, then one arm for the line across.  Straight arm up for the stick, then three horizontal arms down down down for the rest of the E.  I “signal” the letters backwards, so they’ll be right way round for him.  We do every letter of his name that way except the G.  He loves it and has a giggle fit every time I do it.

Our big project is LEARNING HOW TO PEDAL A TRICYCLE.  I have never had to teach this to a kid, but he’s been stroller-bound too long, or something, because he just does not have the knack of pedalling at all.  I wanted him to use the metal Radio Flyer trike, but it’s a bit bigger, so I took out the little plastic kiddie trike and that has just about the right leg length for him.  I walk alongside and shove his little feet up and over.

This is nuts.  I keep thinking I should just let him figure it out… but I also want him to be able to tootle around on a bike of some kind as soon as possible, so until he gets the hang of it, out we go to practice on the bike!