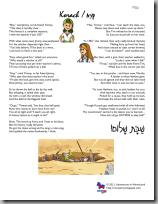 “Boy,” said Jimmy, to his friend Timmy,
“This class is terribly slow –
This history’s a complete mystery;
I wish the teacher’d just GO!”
With what came next, Jimmy was perplexed,
For the teacher departed right then –
“You kids behave; I’ll be back in a wave,
I just have to fetch a new pen.”
“Hey, what good fun,” called out everyone,
“Who needs a teacher at all?”
They sat acting nice per their teacher’s advice,
Till one of them pulled out a ball.
“Hey,” cried Timmy, to his friend Jimmy,
“Who says that that teacher’s the boss?
“I’ll take the lead; give this class some speed,
Now Jimmy, you stand across.”
So he threw the ball to Jim by the wall,
But whizzing, it sailed clear past
As with a crash the window did smash
And the ball hit the flagpole mast.
“Oops,” Timmy said, “but boy, that ball sped,
Now who wants to learn here from me?
You all sit tight and I’ll teach you all right,
A history lesson as it ought to be!”
Now, Tim stood up front, and I hate to be blunt,
But his history really did stink;
He got the dates wrong and he sang a rude song,
And spelled the names backwards, I think.

“Hey, Timmy,” cried Sue, “I can teach the class, too,
Please step down and make room up there.”
But Tim refused to be so excused,
So Sue just stood tall on her chair.

“In 1492,” she chimed, then only really kind-of rhymed,
Making facts up from her head.
And chaos ensued as class unrest brewed,
“I can do better!” each student said.
But then, with a grin, their teacher walked in,
“Lucky I came when I did!”
“I’ll say,” said Jim and his little friend Tim,
While Sue in the corner just hid.
“You see, in this parsha – and listen now, Marsha,
A leader is what Hashem gave.
But not all agreed and they did not take heed
And their lives, it was too late to save.”
“So trust Hashem, too, to pick leaders for you,
And teachers who teach in our schools;
Picked for a cause, they hold up its laws,
And keep the school safe with their rules.
“Though Korach got swallowed with all who followed,
Hashem hates to punish so I won’t at all,
The ‘punishment’ earned is the lesson you’ve learned…
Now let’s all go OUTSIDE to play ball!”