The kids were intrigued by the half-maple-leaf design I cut out (more information in this post), and I discovered that by cleverly folding a piece of construction paper into quarters, Naomi could single-handedly (well, two-handedly) cut out not one but TWO red maple leaves for our Canada Flag craft.

The rest of the “craft” was mindlessly easy, of course, even for Gavriel Zev, but they enjoyed it disproportionately well for some reason.  You can see GZ has his little mirror here next to his flag.  He spent about fifteen minutes just peering at the half-leaf in the mirror.  He had the best time when Naomi was doing symmetry in math, too.  He just sits chortling at how he can make the picture appear and disappear. 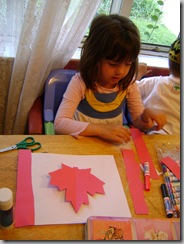 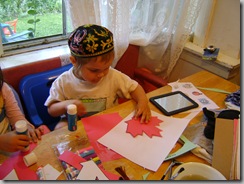 Then, he asked me to make a half-magen-david to look at in his mirror, so I did, and I had the brilliant idea of tracing it onto quartered construction paper before I gave it to him.  I stapled the construction paper so it wouldn’t slip around while Naomi Rivka was cutting it out: 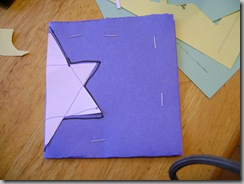 So then, just for balance, we made Israeli flags to go with our Canadian ones.  It was fascinating because Naomi tried to make hers like the Canadian flag, with the stripes vertical, until I showed her a few pictures on the computer.  Sometimes, we assume our kids know things, but it’s helpful to kinesthetize (is that a word) the knowledge anyway. 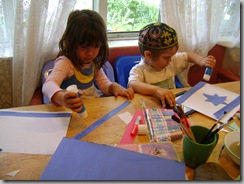 Now she knows that the Canadian flag has two WIDE, VERTICAL stripes (I didn’t use the word vertical, just said “up and down”) right AT the edge of the page.  The Israel flag, on the other hand, has two NARROW, HORIZONTAL stripes (“side to side”) which are a little bit in from the edge of the page.  So in an unschooly kind of way, this was also a lesson in math/logic, aka same/different for big kids.

After they made their flags, GZ insisted on going outside to find a stick to glue his Israel flag onto.  Fun!

Making flags is something I wouldn’t have thought of doing with them… mostly because I did it a few times with the older kids, and I guess now I’m sick of it.  And I always forget that just because I’ve done it a few times, that doesn’t mean THESE kids have done it before.

I wonder how kindergarten teachers start to feel, doing the exact same craft every year for 20 or 30 years…?