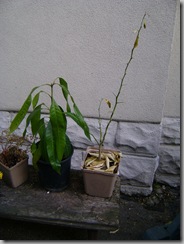 My beautiful lemon tree from a seed died!!!   At least, I think it’s dead.  At least, I dare not officially hope that there might still be some life in it.  It shot up like crazy over the winter, so now it looks like a spiky dead stick in a pot.  Hope, hope, hope.

I don’t know what went wrong, really, because it was sitting beside the mango tree, which survived beautifully.  Sad, sad, sad.

Here’s an experiment for this year’s growing season:

Pile a bunch of dead leaves at the bottom of the driveway.  There’s already a bit of soil gathered there because there’s a bump in the driveway.  Let the leaves sit over the winter.  In spring, stick some weedy plants in.  Let weed seeds land there and sprout.  See what happens.  I’ve planted horseradish, which is weedy and I figure it can grow and take off pretty much anywhere.  I’ve also stuck in some hens-and-chicks, because I really don’t like them.  And a couple of spare marigolds.  And now I will neglect this pile and let the weeds cover it and the horseradish fill it and grow.  I was inspired to do  this by a weird book (can’t remember the 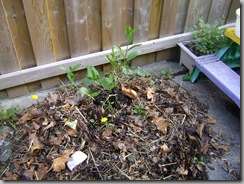 title!) I got out of the library last year that talks about growing stuff in piles of soil in driveways and on stone surfaces.  You need plants with shallow roots (which horseradish, technically, is NOT), but eventually, the plants anchor the pile and it starts to look like something green and semi-nice.

Maybe,  maybe.  Though with my track record for keeping green things alive… also maybe not.