If you are within driving distance, do you have one we could borrow tomorrow???

This is “just” the laptop, but in a family with 6 people clamouring for computer time – including one whose high school classes are entirely on the Internet – not being able to boot one of the two computers is a BIG problem. 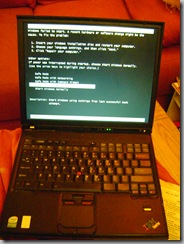 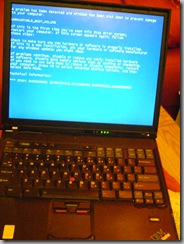 Weirdly (coincidentally?) BOTH computers had trouble booting tonight.  I was able to get the desktop up in safe mode and did a System Restore to Friday’s configuration.  Weird.

And the laptop booted just fine when Elisheva wanted to play on it after Shabbos.  Then, she logged off and Ted tried logging on… see above.

Worst-case scenario is I wipe the hard drive, install XP from my mother’s boot CD (we have an XP cd but it’s only for an upgrade install), and use XP on it from now on.  I only installed Vista originally because the previous owner had XP and I couldn’t get past her password protection, so I just wiped it to install Vista.