Emor / אֱמֹר Parsha Overview: Speak to the Kohanim – and everybody else

Yay!  We’re getting back to normal after Pesach… bit by bit by little teeny bit.

Do you remember another name for Sefer Vayikra? Toras Kohanim – “teachings for the Kohanim”!

Kohanim have many special mitzvos, but that doesn’t mean the rest of us can’t learn from them, also.

Did you know that a kohein shouldn’t come close to a dead person’s body?

They had to stay ready to work in the Mishkan, and a dead body made a person tamei (impure).

However, to bury a close family member, the kohanim were supposed to become tamei.

This teaches us how important it is to arrange proper funerals right away!

Kohanim could also only marry certain people. Every part of their lives was special, especially their families.

They had to choose a tzadekes, an excellent mother and grandmother to the next generation of kohanim.

There is a strange thing in this week’s parsha. Most of we’ve read so far is about our neshamas – the things we think about and the way we daven. We’re all different; It doesn’t matter to Hashem how we look, or whether we have all the same senses and abilities as any other person, because what is inside us is most important.

This parsha says something that, at first, seems very different.

If a kohein wasn’t perfect on the outside, if he was blind, or couldn’t walk, he couldn’t do the avodah.

Also, if an animal wasn’t perfect on the outside, it couldn’t be used for a korban.

The things that made a person or animal not perfect were called a מוּם /Mum, a blemish.

It seems like the Torah is now telling us that the outside really DOES matter.

It even sounds a bit like Hashem likes people or animals less if they’re not perfect.

But we know that’s not true – so what does it really mean?

Well, we know nobody is perfect – we learned already about the different korbanos that were brought because everybody makes mistakes. And we learned in Bereishis that Adam and all people were made b’tzelem Elohim, to look just like Hashem. Blind people and people who can’t walk are still precious to Hashem!

In a couple of months, we will read in Parshas Ki Seitzei that soldiers were not allowed to go to war if they were afraid, or if they had a new home they hadn’t lived in yet, if they’d just gotten married, or if they’d planted grapes and hadn’t eaten any. They could be wonderful, strong soldiers. The Torah doesn’t say they’re bad people – but they must leave. They can’t go to battle, because they are too busy, too distracted, even if they think they’re okay to go fight in the war.

This is just like a mum on a kohein, or on an animal. A person may be a wonderful, fine kohein – but the Torah says his mum is too distracting. Maybe he feels he’s less than perfect and won’t do a good job with the avodah, or maybe not.

With an animal, people might see a scarred or scratched animal and know Hashem wasn’t getting the best one.

Either way, we have to trust that Hashem loves us and sees how well we serve him on the inside.

This parsha next reminds us about all of Hashem’s special days!

It starts by telling us all about Pesach! Eat matzah and don’t do melachos on Yom Tov, just like on Shabbos.

(except that, on Yom Tov, we are allowed to do a few melachos to cook that day’s food)

After Pesach, we must bring the Omer barley offering every day for seven weeks.

In Tishrei, the seventh month, we have Rosh Hashanah and Yom Kippur. We can’t do melachos on either day!

Then, a few days after Yom Kippur, grab a lulav and esrog and sit in a sukkah – it’s Sukkos!

Other special days, like Chanukah and Purim, came later, after bnei Yisrael went into eretz Canaan.

In those times, there were many bad laws. If you hurt somebody’s hand, even their baby finger, they might be able to kill you, or take away everything you owned. The Torah warns us to let judges decide fair punishments. 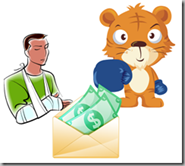 In Parshas Mishpatim, we learned that if we hurt someone, we have to pay to take care of them, and this parsha shows us how to do it fairly. If something small like a tooth is hurt, we only have to pay for the tooth: a small amount. If an eye is hurt, we only pay for an eye. If we kill an animal, we have to pay for a new one. Hashem wants the punishment to be match the injury. This was a brand-new idea in those days. Today, most courts work that way.

Hashem promises that if we keep the Torah, He will treat us more than fairly… as we’ll see when we read about Shemittah next week!