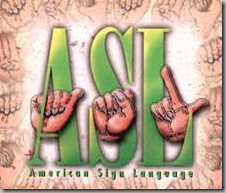 I’m not going to generalize about deaf people based on only having met a few, but I’ve noticed… well, some deaf people don’t have wonderful spelling.  And spelling is important to me – it’s something I notice.

One of the handouts that was given to our class early on mentioned that reading in English is an area where many deaf people are at a disadvantage, because ASL is NOT English, is not coded English, is not in any way related to English.

(it’s actually becoming less related to English with the deprecation of “initial” signs, like the D handshape in DAY, or the L at the mouth for LUNCH – apparently being phased out in favour of the less-Anglocentric FOOD-NOON)

So native speakers of ASL are at a disadvantage when it comes to English.  I’ve known it for a while, but somewhat dismissed it, because after all, anyone can learn English… right?  Especially when they’re surrounded by it as Deaf people are in the US and Canada!  Well, dummy me – not if they can’t HEAR it.

Which would explain a few of the things I’ve noticed about deaf spelling.  Like in my class tonight, for instance, where the teacher was trying to explain what a sign meant and – his usual final recourse – resorted to writing it on the board:  I think he wrote “roltone.”  A couple of people nodded and wrote it down, but I sat there like a dummy asking “WHAT MEAN?”

He looked at the word, shook his head and finally, painstakingly, corrected it to “routine.”  Which made a lot more sense considering that was what we were learning about – daily routines.

This drove home the idea that without any pronunciation of the word to go by – as we would have even in a foreign language like French or Spanish or German (however foreign their phonetic spelling rules might seem to us) – spelling is definitely going to get mixed up at times.

Basically, deaf people have no choice but to learn English like Chinese kids learn to read Chinese – as a collection of thousands of unrelated sight words.  They must either memorize words in their entirety or take the time develop a complex understanding of Greek and Latin word roots, which in any case would only help you in some-percentage of words (Google’s not working due to the aforementioned Internet outage, so I’m having to sound like a dummy because I can’t look stuff up).

Either way of language acquisition (memorization or root-memorization) is bound to be painfully slow and full of pitfalls hearing people cannot even imagine.

(On the other hand, you might not get tripped up over homophones like “sight” vs “site” if you can’t hear the words!)

Now, of course this only applies to people who were born deaf or prelingually deafened.  Adults who become deaf obviously have all the sound-based cues they have  had all along.  In which case, writing in English becomes a very good way to communicate – like my grandfather did for the last part of his life, as did Beethoven.

But for anyone who might possibly wonder why a deaf person would feel insulted when you suggest they use captions or write in English, it’s because English is very much not just a second language, but the UNHEARD language of a foreign culture, as inaccessible at times, perhaps, as reading Martian might be to an English speaker.

(For a sweet example of a Martian-to-English translation, though it may not be up for a while, check out the FAQ for next week’s MayFest event, held by the Ontario Association of the Deaf.  The spelling in this case is utterly perfect, but the pristine text reads like it was composed by… well, not foreigners exactly, but people for whom English words and grammar come less naturally.)

This realization, obscure as it may be, has finally helped me comprehend why there is a real and ongoing need for sign language, even in a future of cochlear implants.  Nothing else can compare in terms of allowing deaf people to understand and articulate their thoughts fully and naturally.  I’m sad that many deaf people are growing up without this vital tool and given the message that their implanted “hearing” is as good as it will ever get.

p.s.  Will somebody please explain to my mother that not only is this sign not RUDE, it becomes far less funny each time you mock it beyond, say, the 12th time or so?

No-doubt fascinating articles on this topic that I can’t read because of my Internet problem, but I’m saving here to bookmark for later (and you can read them, too!):

p.s.  Why can I use Google Reader, intermittently, but not Gmail???

p.p.s.  I wrote this last night during out off-and-on Internet blackout.  You’ll be happy to know – as you can probably tell from the volume of posts tonight – that it’s working again!