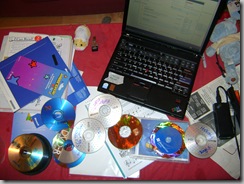 (But don’t all these “rescue CD’s” look cheerful, lined up like that?  The zhu zhu hamster doesn’t hurt, either!)

I decided to give up on Windows altogether (I’ve never liked it anyway!) and migrate to ubuntu.  Unfortunately, ubuntu is reporting bad problems with the hard drive.  And problems like that generally tend to escalate – MINOR hard drive problems are compensated for in the firmware or something, so by the time the OS gets wind of an error, it’s because it’s cascading out of control.  Or so 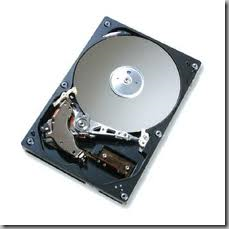 everything I’ve read says.  I am, however, optimistically running one of these cheerful rescue CD’s right now in the background, running a low-level format in the probably vain hope that it can still be saved.

If not… well…  this cute little guy’s on my wish list at NewEgg.ca.  Pop out the old one, pop in the new one… $80-something and we’ve got a brand-new laptop!

(Remember, too, it was FREE in the first place, about a year ago… so I guess I can’t really complain.)

But I’m still going ubuntu.  We were using it off the CD all day today and the linux GUI has come a LONG way.  I’m pretty impressed.