EFink has an interesting guest post up at DovBear’s blog right now showing a few contemporary renditions of the Rasha, or wicked son from the Haggadah, and how it highlights our unfortunate tendency to make snap judgements about people based on how they dress and their outward mannerisms.

(unfortunate though it is, I would argue that this reflex is to some extent necessary or we’d go nuts trying to sort out the good people from the bad people – there is probably a name for people who lack this ability to intuit based on outward signs)

I have always personally admired the version in The Animated Haggadah, which is actually four aspects of the same person (he’s wearing the same outfit in all the pictures, with a slightly different hairdo):

Another kinda-modern take is Otto Geismar’s from 1927 Germany, which are reprinted in my Different Night Haggadah:

I love the stick-figure simplicty of it.

Here’s another one, admittedly not from a Haggadah, but from a children’s book series called Round and Round the Jewish Year: 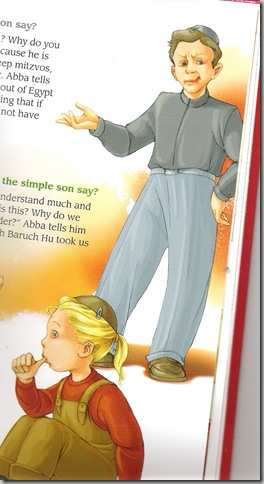 This Rasha is kind of unique in that he is actually dressed MORE formally than the other sons, and he’s also wearing a kippah.  Most show a ballcap or no headcovering at all on the Rasha.

But this one is quite a bit older than the others, as if they, too, will turn cynical when they’re all grown up.  Or maybe he’s just their teenage big brother, going through a difficult phase.

And if we keep inviting him to our seders, eventually he’ll be the Chacham (wise son) once again.  Now that I think of it that way, I kind of like this illustration – a bit.  The one on the bottom is the She’ayno Yodeiah Lish’ol (the one who doesn’t know how to ask), in case you couldn’t figure it out.