If you don’t have a tune, sing it to Dayeinu! 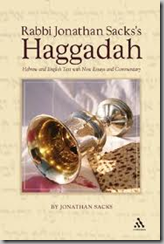 One of the more tedious bits of the Seder is near the end when we recite a lengthy liturgical poem, either (first night) vayehi b’chatzi halayla (“It happened at midnight!”) or (second) v’amartem zevach Pesach (“you should say – this is the Pesach offering!”).  We don’t have a tune for this, so somebody (moi) just sort of drones it while everybody chimes in on the last word of each line.  Dull, dull, dull.

So I was curled up with my new Jonathan Sacks Haggadah today during a quiet moment (thinking, “wouldn’t an Oliver Sacks Haggadah be super-cool, if a bit weird?” “The Man Who Mistook His Wife for the Marror”  Oh, never mind… nobody will EVER get that in a million years.)

Anyway, I discovered - drumroll – that BOTH of these dreary, complicated poems can be sung to the standard tune of “Dayeinu.”

Which is a GREAT choice because a) everybody knows it and b) we don't overuse it - ie we usually do it once through and that's it. Once more isn't going to kill us.
In case anyone's curious, here's the first "verse" - first, the dayeinu line (ie which bit of the tune to use), then the Hebrew, then transliteration:

Day, day, aynu,
וַיְהִי
Vayehi (you have to draw this out just a bit)

day, day, aynu,
בַּחֲצִי
be-chatzi (draw it out a bit)

day, day, aynu,
הַלַּיְלָה
ha-layla (draw it out a bit)

Repeat for each group of 3 lines, and use up the second "dayeinu" to squish in the 4th line at the very end. (and end with a fast vayehi b'chatzi halayla in the space of the very last dayeinu).  I hope this is clear.  I would record myself singing it, but I’ll spare you!

There is SO much still to do… and we are nowhere near ready.  Off to watch The West Wing instead!  I have made the big kids promise they will read the haggadah tomorrow… and specifically, read through these poems so I will not be the only one singing.  If only my extended family would do the same.