Going to Shul? A guide for goyim! 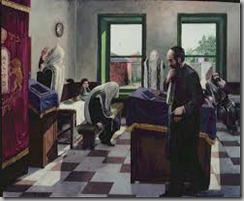 I wrote this in response to a question from somebody wanting to visit a synagogue for a Passover service, but thought it would make a great post topic, while I’ve got the non-Jews swarming around hating me over my “Feasts” posts.  :-)

If I have used any words you don’t know (yet!), please check out this fine glossary.

So you’re thinking of going to synagogue – Great!!!

What’s the best day to go?

Hands down, I think you want a MORNING service.  Evening services can be lovely, but tend to be more intimate.  Save it for later.  Go when you will be as close to anonymous as possible!

Most synagogues (Orthodox, Conservative and most Reform - and it is REFORM, without the "ed"; apparently, it offends them :-) ) have big morning services on Shabbat and all holy days.

(As an aside, the Jewish day starts at sunset the evening before; that's why the first DAY of Passover this year is Tuesday when the first NIGHT is Monday.  Confusing!  So Shabbat starts on Friday evening, and continues until sunset on Saturday.)

These services are almost indistinguishable - ie without knowing a lot of Hebrew, a Passover service is going to feel almost exactly like a Shabbat service.

There are very few changes for holidays:  small variations in the Amidah, the silent prayer, and its repetition; a holiday theme to the sermon; and a holiday orientation to the Torah readings.  However, by "holiday orientation," depending on what time and what day, it could be a reading describing Temple sacrifices for that holiday, so not exactly tons of fun.  And the Torah reading is all in Hebrew.

I'd suggest that Shabbat is a better time to attend a Jewish service for the first time than a holiday.  Even in an Orthodox synagogue, weekday holiday services are usually less well-attended than Shabbat services because people (sigh) have to work.  More so in non-Orthodox congregations.

What kind of synagogue should I choose?

In terms of visiting a synagogue, please consider choosing an Orthodox one.

Not just so you can see and hear the full, ancient liturgy, but because it is where you are most likely to find literate Jews who are aware of the rituals and meaning behind prayer.  In other synagogues, you may find either watered-down liturgy or disinterested, bored, unengaged Jews.  I sure wish it weren’t so, and there are surely exceptions both ways, but that is my experience.

However, (as with a full Latin mass) the trade-off is that there's less English, more unfamiliar stuff going on... and also, perhaps, people who are slightly less open to your presence.  Not unfriendly, perhaps, but visitors are less common in these communities, and depending on the size of the synagogue, it can be a tight-knit group.

Whenever I visit churches, people are lovely and shake my hand and welcome me (not just during the sign of peace!), but this usually doesn't happen in synagogues.  You may be left alone; don't take it personally, though I apologize if you get a crowd like some I’ve seen, where most of the people are there to shmooze with their friends rather than with God.

Can I bring my kids?

If I were you, I would hold off on bringing kids until you have been there once or twice, so you can direct them a bit and also know what the best timing is in terms of when to arrive.  Arrive?  Oh, yeah...

I should come on time, right?

You’d think so, wouldn’t you!

Whether a synagogue morning service is called for 8:30 or 9:00 or whenever, most people don't show up at the stated time.

Reform is the most on-time; Conservative, people file in quietly anytime before the Torah reading; in Orthodox synagogues, people tend to come and go seemingly at random.  In general, the more observant the crowd, the less decorum in the "churchy" sense of the word.

Showing up at the starting time can mean a very long haul.  This is another reason to go without kids first.  See what time the Torah reading is; see what time most people show up, and then your child will have a more pleasant experience.

How long does it take?

Even if you come late, services are LONG, so be prepared!  Two hours is not uncommon and three and even four are not unheard-of.  Reform and Conservative services are slightly more streamlined to get you out of there in time for lunch.

After services, there’s usually a communal “snack” called Kiddush.  You’re welcome to join in, especially if you want to meet some people (you may or may not see the rabbi there, depending on the congregation).  But you don’t have to – sneak out if you want to; I doubt anyone will be offended.  Kiddush can range from cookies and grape juice to an all-out hot-food buffet.  In some Orthodox synagogues, Kiddush is also sex-segregated.  Follow the lead of other people the same as you.

What else should I know?

- In an Orthodox synagogue, seating is sex-segregated.  A 7-year-old boy can stay with the ladies, but probably not one over 10, though there's a bit of wiggle room.
- Sit wherever you want - and can see/hear best! - but the first couple of rows may be reserved for family if there's a Bar Mitzvah.
- Synagogues in general are more formal  than churches.  Dress a bit up.  I didn't tell my husband and he didn't wear a suit.  If you're a man, wear a suit.  You can always dress down the next time you come if it's a casual congregation.
- However, you don't need a hat if you're not a married woman.  If you like hats, and you're going to an Orthodox synagogue, feel free to wear one, but it's not required AT ALL.  In a Conservative or Reform Temple, you'll get stares if you wear a hat - I know because I do.
- Stand when the ark is opened and when the Torah "stands," ie when it's being lifted and carried around.
- During the long, standing silent prayer (longer in Orthodox synagogues than Reform and Conservative), it's okay to sit down even while others are praying.  But always stand up when told to.  ;-)
- I don't think there is anything in the Hebrew prayers that a Christian would feel uncomfortable saying "Amen" to.  We pronounce it "aw-men," not "ay-men."  :-)

They’re staring at me!!!

Wherever you go (and I do hope I haven't discouraged you!), if you're not white, you can expect a few heads bobbing around to look at you.  I hate that that is true, but the fact is that historically, most Jews ARE white.  Ashkenazim are pale-whitey-white, and Sefardim are more Arab-looking, but we're all mostly shades of pink and beige.  We love converts, we welcome born Jews who are all- or part-anything, so there is no racial hostility built into the faith, BUT it just so happens that other colours are less common.  (my cousin is Chinese but also born Jewish - and yes, she gets "looks" sometimes)