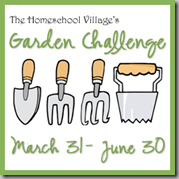 Other challenges I participate in: 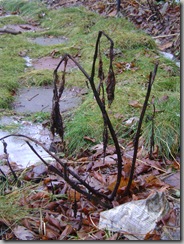 I’m supposed to include a current picture.  Here you go!!!  Dead coleus from last year.  The garden has been kind of a “no-grow zone” so far, with late, cold winter weather moving in just as spring officially began.

I garden in a tiny urban front and backyard in Toronto, which is officially Zone 5, but today, more like Zone 3.  Blah.

I have two composters, three square foot beds, about four or five sub-irrigated (aka self-watering) planters, a bunch of happy perennials which are generally far outnumbered by the unhappy veggies in my low-sun backyard.  We have some strawberries, raspberries and hopefully, this year, blackberries.  I have a special fondness for hanging plants, though I don’t have nearly enough of them, nor take good enough care of the ones I do have.

In terms of homeschooling, I’ve always been reluctant to let the kids do their own thing, have their own plot, etc., because the garden is so TINY and, overall, so unrewarding.  Naomi has had planters before, and I usually let her choose a few annuals.  Guess I have to put some serious thought into how to include her more in the garden… though she also shows a definite lack of interest.

The final section of our Living Learning Books Science curriculum for this year is a unit on plants.  The timing is great – we’ll be starting that right after Pesach.  Hopefully, that will stir some interest and momentum that will carry on right through the summer. 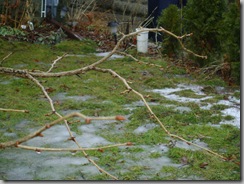 Oh – also!  Inspired by The Holistic Homeschooler, we are undertaking a VERY informal tree study of the Turkish hazel tree in our yard.  That basically involves looking at it every week or so to see what it’s up to.  I hope to have Naomi sketch it in various seasons.  This is its fourth year here (fifth?) and it has yet to bear nuts.  Hopefully, THIS will be the year!  So far, though, the tree’s not up to much… as you can see.

Plans for this year’s garden include:

Despite a couple of successes last year, I am feeling VERY, very discouraged.  Can you tell?  I’m reluctant to even join a gardening challenge because I just know that a month from now, everybody’s going to be hauling in nice bushels of HUGE tomatoes and I’m going to be stuck here, struggling to get kale to grow.