This is a basic overview of the parsha story in a format adaptable for kids of any age. Sources include parsha text, commentaries and midrash, though when introducing midrash, I try to include the words “some people think” or something similar.

What’s the dirtiest job you can think of? 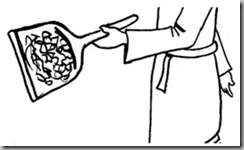 Taking out the garbage?  Cleaning the bathroom?  Changing the kitty litter?

When there’s a dirty job to do, does anybody jump up and volunteer to do it?

In the Mishkan, there was one very dirty job that needed to be done every single day.

What happened to all the korbanos the people brought?  (they were burnt on the mizbei’ach)

And what’s left after you are finished burning something?  (ashes)

Have you ever seen the ashes left after a campfire or in a fireplace?

Ashes are dirty – very dirty!  They get into everything, they blow everywhere.

…And the kohanim would race each other for the chance to do it!

Some say that at first, the fastest kohen up the ramp got to clean the mizbei’ach.

After one kohen fell and got hurt, they found a less risky way to take turns.

Little jobs, unpleasant jobs, can be very important, too.  Like the kohanim, we should hurry (safely) to do every mitzvah!

Hashem said to keep the fire on the mizbeai’ach burning all the time!

What does “all the time” mean?  Every single day, every day of the week!

How is this different from what we do now?  (we don’t have fires burning on Shabbos)

In the time of the Mishkan, the kohanim could add wood to the fire on the mizbei’ach – even on Shabbos!

One name for Sefer Vayikra is Toras Kohanim – “teachings for the Kohanim.”

In this week’s parsha, Moshe helps the kohanim get dressed and oiled and ready to work in the Mishkan.

A lot of Vayikra, like this parsha, teaches rules the kohanim had to know for bringing korbanos.

This makes people think about a few questions:

Every single kohen around the world knows that he is descended from Aharon, the first Kohen Gadol.

Kohanim have the job of going up on the bimah or “duchen” – to bentsch (bless) everybody in the shul.

Have you ever seen them “duchening”?  Ashkenazim usually duchen only on Yom Tov; some Sefardim do it every day.

·         They thank Hashem for passing on Aharon’s job of bentsching bnei Yisrael.

·         They say the same 3-line bracha that parents say over their children on Shabbos!

The Kohanim were Hashem’s gift to bnei Yisrael.

Later on, we will learn about how bnei Yisrael divided up eretz Canaan (Israel) when they arrived.

Every shevet received land – except… (shevet Levi, the kohanim and their helpers, the levi’im)

If you have land, you can… (have a farm, you can raise animals, grow food crops, etc.)

With no land, the kohanim survived on the korbanos and other gifts bnei Yisrael offered in the Mishkan.

Luckily, there were lots of gifts!  Or else the kohanim might have said,

“we’re so hungry we could eat an octopus!”

(Could they eat one?  We’ll find out in next week’s parsha! )

Did you know???  Every time we bake challah, we remember the Mishkan!  Do you know how?  We tear off a small piece of the dough before we bake it.  In the time of the Mishkan, it was given to the kohanim.  The many small pieces would feed the kohanim and their families.  Today, we burn the dough; we’re still not allowed to eat it!