A tisket, a tasket – where’s my mother’s Purim basket??? 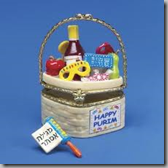 A card arrives in the mail before Purim.  We tear it open, look at the name, and recycle the card:  one more family making a donation instead of sending a mishloach manos basket, box, bag or plate this year.

Not that this is a problem!

By the time we get to thirty-some-odd baskets full of nosh we have to finish by Pesach, I’m happy to forego one or two or a dozen, though you should know that I CHERISH EACH AND EVERY BASKET (just in case yours was one of the ones we got from amazing friends and acquaintances around the community).

In fact, last year, when our list was teetering precariously near fifty addresses, I started doing the donation/card routine myself, at least for some folks.  I figure it’s a better way to honour shul rabbis etc., who probably don’t need another basket and might not eat my baking anyway.

Which is why I was surprised my mother was so sad to get a card this year from a neighbour who usually delivers baskets.  The neighbour has had knee problems and that’s probably why she sent cards, but my mother was very, very sad.

You have to understand my mother.  She is in every way my opposite:  neat, organized, polite; sociable and well-liked.

Since being widowed just over two years ago, she has made new friends, painstakingly stayed in touch with old ones (including extended family on my father’s side), joined a gym, found a volunteer museum job, travelled to Europe, driven around the province, gone to a resort, and had countless friends and family members over for numerous Jewish and miscellaneous occasions.  Not every single week, but often.  I don’t say it often enough:  she amazes me.

On Purim, she sends out mishloach manos.  Not many, but some, and I’m sure they are quite nice, neatly labelled and sent to well-chosen recipients; people who NEED Purim gifts, maybe because they’re lonely or because nobody else would send to them.

One of the rabbis at our shul stood up this year and said that rabbis don’t need baskets, but  that we should try to think of somebody out there who really does.  My mother smiled when she heard that:  that’s how she plans her basket-giving.

Apparently, nobody else heard him.  At least, nobody sent one back to her.  Well, okay; ONE person.  Plus a couple of cards.  To someone coming home to one measly basket, sending cards does start to seem Scrooge-like.

“It’s nice that you give tzedaka,” I might mutter, in light of that one basket, “but since it’s one of the mitzvos of the day, bully for you – no extra brownie points for sticking me on the list.”  A hamentash or two, on the other hand, is a nice touch that says, “I shlepped down here in person because I thought you’d like this.”

In case the Torah isn’t explicit enough about caring for widows, I’m going to say it straight out:  even the people without young kids need mishloach manos.  They may not NEED the candy, the party blowers, the peanuts, the miniature kiddush bottles.  But they NEED the shlep-in-person caring that says “you belong.”

Purim seems like one big fun-fest, but for some people, it probably feels like one of the loneliest days on the calendar.

Matanos la’Evyonim may literally mean gifts to the poor, but maybe “poor” doesn’t have to only mean people with run-down houses and tattered clothes.

Widows, converts, single people, older people… they NEED to know that they are still part of the community, and maybe there is no better time than Purim, when they may be feeling irrelevant as most of us obsess about how much work we’ve put into costuming the next generation and what we can cook to top last year’s seudah.

Look up from all that busy-ness for a second and – before you send off the donation cheque or cheerful Purim card – ask yourself if you know anyone who would really, REALLY  just welcome a plate of cookies or a basket with fruit and juice.