Kids took buses – period.  What right does a kid have to beg a parent to shlep him or her here and there and everywhere, simply because that’s where said kid HAS to be???  Maybe my parents were more into independence than others, but from the age of 12ish on up, I mostly took buses.

So tomorrow, one of my kids (let’s just say it’s NOT Gavriel  Zev!) has to venture into the Outlying Regions for a school event.  Said child begged me to drive it.  Kicked, screamed and finally relented and after several false starts and threats of violence, went to bed.

I said I would put together good directions, and after half an hour’s solid work, here they are: 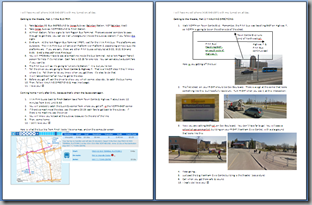 Yes, I could PROBABLY have driven said kid there in the hour I wasted researching transit routes and typing up elaborate, turn-by-turn directions with photographs.

That’s so totally not the point… I hope.  I really, REALLY hope this is one of those empowering “teaching kid to fish” moments – as opposed to the “popping kid in car and driving to fish store” moments everybody else’s families seem to have.