Great Circles:  Arctic, Cancer, Equator, Capricorn and Antarctic.  Four paper-folds, a couple of freehand lines, and a bunch of blobs… and you’ve got the earth, according to Naomi!

I read about this in The Core by Leigh Bortins (which is otherwise a mostly-confusing book that provides too few details and too much “sell” for the author’s very expensive homeschooling program called Classical Conversations).

I like the emphasis on mapwork in Story of the World, but I think Bortins has a point:  kids use maps but generally don’t CREATE maps.  Having them draw the maps themselves helps them internalize their position and the places they are learning about far more deeply than if they’re just drawing lines or colouring in a map they’ve been handed.

I started with a basic map and some guidance borrowed from this lesson by another homeschooler.  She’s also using Draw, Write, Now, Volume 7, which has a lesson on drawing the world, but I don’t think it’s necessary.  I printed her map, shaded it with crayons, and then laminated it.

Today, I showed Naomi the circles on our globe first.  She already knew about the equator, and could guess at the Arctic and Antarctic ones.  I traced my finger around each circle on the globe, then showed how the map is like the globe, only flattened out.  Because it’s flat, the circles become straight LINES.  Not sure she got that 100%, but that’s okay.

She enjoyed the paper folding and line-drawing immensely.

Since she’s very familiar with the continents already, I just pointed out their position and then we started drawing.  I did the continents in a fairly arbitrary order. 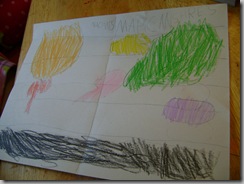 It was a LONG lesson, and she was a bit restless by the end, but I think she was pretty pleased with how hers turned out (above).

Mine is on the right, below.  Apart from the tidy labelling, it’s not really much better than hers, which must have been reassuring (to her, at least!). 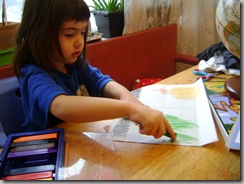 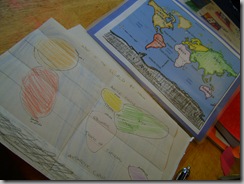 I’d like to keep doing this, maybe every couple of weeks as our geography progresses.  Eventually, we’d move on to tracing and drawing continents, and even individual countries, from memory.

Here’s an article with more details on teaching the Great Circles and Blog Geography.