Please click LIKE in the box at the left-hand side of my blog or at the Bring Daniel Home facebook page.  This is a family who live on our street, and they could use all the support we can offer as they struggle to get their 11-year-old son out of a group home.  Read the article to get the facts and “Share” it with anyone you think might care.

“Build me a Mishkan and I will live there.”  Hashem said it before; now, it was time to get building.

The only problem was:  Moshe still didn’t have any of the special building materials Hashem had asked for!

But there was something that was even more important than building the Mishkan – Shabbos!

Even Hashem’s house, the holiest thing on earth, had to wait while everybody kept Shabbos. 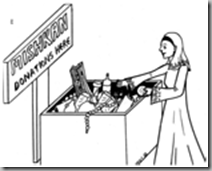 Moshe told bnei Yisrael the things they should bring to build the Mishkan.

He didn’t tell people exactly what to bring.  He let them decide!

Did Moshe say, “Rich people, you bring gold; poor people, bring goat skins”? (no, he did not!)

Moshe didn’t tell the people what to bring, or how much.  It was entirely up to them!

Sometimes, we think about doing something good; this is called “good intentions.”

Good intentions doesn’t mean everything you do will be good; sometimes, what you do turns out NOT good.

In last week’s parsha, bnei Yisrael decided to serve Hashem by building a golden calf – that was NOT good.

Later on, in parshas Shemini, we’ll learn about Nadav and Avihu, who also did something BAD with good intentions.

That’s why Moshe says “wise-hearted”:  he meant “you need good intentions, but also a good plan.” 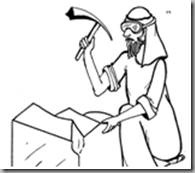 A good plan also needs a good LEADER.  Maybe more than one leader!

His grandfather, Chur, was a tzaddik, killed for trying to stop bnei Yisrael from building the egel hazahav (golden calf).

Betzalel would also have a helper:  Oholiav ben Achisamach, from Shevet Dan.

Oholiav was a simple person from the least important Shevet; anybody can become great by serving Hashem!

Why wasn’t Moshe the leader to build the Mishkan?

We already know that Moshe was very busy judging the people from morning to night, but also…

Even if a person is a very good teacher or artist or dentist or bus driver (maybe even THE best), he still wants…

Moshe was a good teacher, and a good leader, but he still needed the BEST person to supervise the building project.

Now the leaders were ready, and everybody started bringing the supplies Moshe asked for.

“Stop!” cried Betzalel and Oholiav to Moshe.  “We have more than we need!”

“Stop!” Moshe told bnei Yisrael.  “We have all the materials we need.  Now the craftspeople can go to work!”

Expert men and women went to work right away with the materials – they made everything just as Hashem told them.

Never wait to give tzedakah!

Some people say the princes, the leaders of shevatim, didn’t bring materials right away when Moshe asked.

“We will wait,” they said, “and see what is needed later on.”  But they never got a chance!

Right away, the people brought too much, until Betzalel and Oholiav cried out “Stop!”  They had all that they needed.

“You should have brought your gifts right away,” Moshe told the princes.  “Never wait to give tzedakah.”

Still, Moshe told the princes they could bring the jeweled stones for the choshen mishpat, the oil for the menorah, and the spices to mix the ketores.  All of bnei Yisrael, great and small, should have a part in building the Mishkan.

How would bnei Yisrael know they’d built the Mishkan exactly right?  In next week’s parsha, Pekudei, we’ll find out!