As usual, I’m sitting this day out (well – not quite; see below).

But in other, fun news, We celebrated my very special Valen-tiny sister yesterday with tickets to see Cirque de Soleil.  Not FOR her, mind you… FROM her.  It’s a hobbit thing, this giving of gifts to others on one’s birthday.

FOR her, I bought a necklace based on the Miriam image I stole for my Parsha Poem for Beshalach, a few weeks ago.

I liked the image so much, I paid to have the artist, Laura Bolter, solder it into a custom frame, with Miriam’s passuk in English on the reverse: 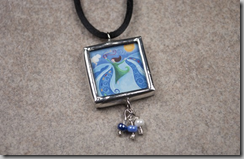 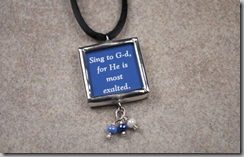 For myself, while I was at her etsy shop, I bought this – totally not Jewish, just a fun, cute thing: 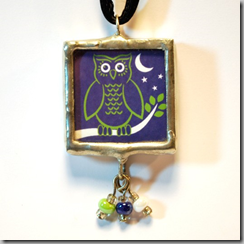 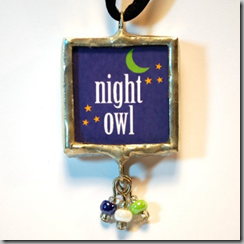 She has all kinds of neat Judaica jewellery, with images of hamsas, pomegranates, plus posters and other stuff at her etsy shop… please do check it out and tell her I sent you!

Oh, I almost forgot:  my usual hypocrisy.  I don’t celebrate V-day, but Ted does, and he presented me with a nice heart-shaped box of Ferrero Rocher chocolates.

In his honour, and in the name of courting the search engines’ favour with tons of relevant and timely keywords, here is an article about Valentine’s Day I wrote for our company newsletter, long, long ago and dredged up just now from my ancient Geocities website (nothing on the Internet ever truly goes away – ever)…

Everybody knows that February 14th is Saint Valentine's day, right? Well, maybe not…


According to the official Roman Catholic calendar, February 14th is actually observed as the day of Saints Cyril and Methodius.


So what happened to Valentine? Has the chocolate industry been pulling the fluffy pink wool over our eyes all these years?

Not quite. February 14th used to be Saint Valentine's Day, but it hasn't been in my lifetime, and maybe not in yours, either.


While there were at least three historical Saint Valentines, ranging from the 3rd to the 4th century, not much is known about any of them. So little, in fact, that when the Vatican went through the rolls of saints in the 60's, figuring out who was an asset to the corporation [ha ha, get it? – fun references for a corporate newsletter!!!], Saint Valentine drew a pink slip.


He was in good company, though. Remember Jolly Saint Nicholas? Well, you can call him plain old Nick now. You can't help wondering who they'll kick out next -- the Easter bunny?

The important thing is that even though he's gone from the calendar, we can still remember him -- if we can figure out which Saint Valentine to commemorate.


The most well-known one was a physician priest who lived in Rome and was persecuted and imprisoned for his Christian beliefs. His reputation as a healer had spread, though, and even the Romans used to come to him for his miraculous cures.


Unfortunately, that didn't stop them from killing him, in an unknown but surely gruesome way, and many ancient martyrologies list the date of his death as February 14th. That date was always suspect, though, linked as it was with pagan fertility and mating festivals. Equally suspect was the fact that the Catholic church chose to associate this date with lovers and betrothed couples, in essence "baptizing" the pagan festival everybody was celebrating anyway.

But it's heartening to note that the Church's esteem of Valentine's talents didn't end there. Throughout his varied posthumous career, Valentine has also been regarded as a patron saint of epilepsy, fainting and plague, of travellers, and also, incidentally, of beekeepers.

It's that last that really piques the imagination. I couldn't find any information -- and believe me, I tried -- about how he came to be associated with this particular profession.


But I'm not the only one who used to get those cards as a kid, the ones with the cute little bumblebee buzzing around saying, "Won't you BEE my valentine?" Maybe it wasn't just an innocent pun. So this February 14th, even if you won't be hearing about him in church, you can still remember him in your thoughts. Take a moment to remember this noble martyr, especially if you're doing any swooning, travelling, or being bitten by plague-bearing rodents.


And at least now you'll be able to chuckle over the deeper significance if that special somebody just happens to whisper in your ear, "I love you... honey."