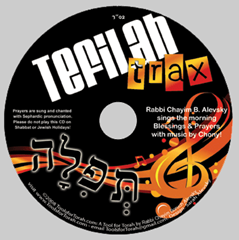 I wrote about Tefilah Trax when I ordered the CD a couple of months ago… but haven’t followed up to say just how THRILLED I am with this product!

From Tools for Torah, this CD features the ENTIRE davening, the whole thing, not  at all dumbed-down for kiddies – in fun way that I believe will encourage a real love of davening.

The tefillos are on separate tracks, making the playlist HUGE – I think there are 64 tracks.  Each tefillah is sung and enunciated very, very clearly by the person Rabbi Chaim Alevsky.

A note about pronuciation and nusach:  Pronunciations on the CD are all Sefardi, and in fact, the davening is “nusach Sefard” – still Ashkenazi (I know, it’s confusing:  Sefard IS Ashkenazi; Sefardi is what Sefardim use), just slightly different from what we use.  For instance (I’m listening to it as I type this), he just sang “la’asok al divrei Torah,” not “b’divrei Torah,” like we do in our Ashkenaz siddur.  The differences are mostly so small that kids won’t notice them – but they do realize the Ashkenaz/Sefard pronunciation differences.  So far it hasn’t confused them or changed the way they daven when we do it together.  I’m not too worried, in any event.

For some of the better-known tracks, there are tunes – I think he provides 3 for Modeh Ani.  Most tracks don’t have special tunes, and these are just chanted straight through – a little monotonous, but I swear, even on those tracks, you can almost hear a smile in his voice.  Rabbi Chaim just sounds SO thrilled to be davening!

There’s a bit of a weird echo in the background of the tracks, but after the first couple of times, it didn’t bother me.  And then there’s all the other stuff I like – there’s SO much!  Including…

How many davening CD’s would have your kids dancing around the room?  How many would have a 3-year-old begging to hear the davening CD one more time??  Maybe my kids are weird, but I think Rabbi Chaim’s onto something here.

There are three other CDs from Tools for Torah; I haven’t listened to any of these, but there’s a good chance I’d be interested in the Pesach and/or Tishrei CDs for future listening.  They also  have other educational resources – some kind of expensive for home learning – including a very detailed Pesach workbook (there’s also a condensed/translated version that is designed to be more accessible).  Poke around the site and you may discover other items worth acquiring!

(p.s.  For a free preview of Rabbi Chaim’s style, please see some of his selections on chinuch.org, which show the kind of style he uses in the “paid” workbooks.)

But I digress.  Here’s the bottom line:  I recommend this CD highly for BT or geir families where one or both parents didn’t grow up going to day school, davening every day and learning all these tunes and tefillos by heart.